[Note: Our UM vs. FIU poll is still accepting votes in the post directly below this in the blog. Also, join us on Twitter @gregcote] 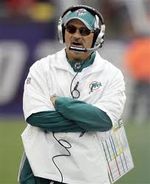 WHAT DO WE THINK OF TONY SPARANO?: I have a new column on the job status of Dolphins coach Tony Sparano online now and in today's/Thursday's inky-pulp editions. Click on Hot Seat to read. I write that, from what I have been told, owner Stephen Ross is growing impatient fast. I also write -- and I must emphasize this part is purely speculation by me -- that it would not shock if the club made a coaching change as soon as the coming bye week if Miami was 0-4 entering the bye, or after this road trip if the record was 0-5. I like Sparano and hope he coaches his way out of this predicament. For the record my vote below would be the middle option: That any change should wait until after the season. But the question here isn't what I think, it's what you think. What do you think should be Sparano's status right now in terms of job security (and why)?

NFL WEEK 3 PICKS: DOLPHINS ... YES, AGAIN: Yes I pick the Dolphins to win again this week, Sunday in Cleveland, meaning it is a close call what has beren worse so far: The Dolphins, or my predicting their games. Click on Week 3 Gems for all the latest NFL picks, and on It's Offensive for my Friday Page column on record-setting pass attacks.

LATEST ODDS ON SUPER BOWL, COACH-FIRINGS: Patriots at 9-2 and Packers at 11-2 have separated themselves a bit in Bodog's latest Super Bowl odds. After that it's Eagles at 8-1, fast-rising Texans 10-1, Chargers 11-1 and Jets and Saints at 12-1. Dolphins are now a 125-1 longshot, tied for 25th. Bodog's first-coach-fired odds have Miami's Sparano 3-1, tied for second with Jax's Jack Del Rio. Only guy on a hotter seat at 3-2 is KC's Todd Haley.

ON MARLINS' LEO NUNEZ: Reports are that Marlins closer Leo Nunez has been suspended and left the team amid reports he has been playing under an assumed name. Too bad he didn't assume the name of somebody who never blew saves.