Heat gets huge upgrade in Bibby (with poll); plus Herald on Henne/Hocutt, Dolphins lose Shockey, cheering in the press box & more

[Big response today on the live chat. Thanks. Do it each Wednesday, 1-2 p.m. Click anywhere on this paragraph to join us live or to post questions any time. No topic off-limits except Christian Bale's homeless-man Oscar beard].

HERE'S THE POINT: HEAT BETTER WITH BIBBY: [Wednesday update: Heat has confirmed the Bibby signing. He will  wear uniform number 0. Pat Riley couched the signing in terms of the team continuing to move "into the direction of our championship dreams."] Original post: LeBron James today spoke of Mike Bibby (pictured) as if he's already on the team, saying he'll be a tremendous help, and that's a good enough source for me. Bibby will be a clear upgrade over Mario Chalmers in both talent and experience, and Miami is smart to get him. Available journeyman power forward Troy Murphy also would have served a use, if only as a stopgap until Udonis Haslem's return, but he chose Boston instead. Bibby is the bigger catch, a no-brainer. The Heat still has a legitimate championship chance, but the team's 12-15 record against teams with winning records underlines that improvement was needed. Bibby brings that. Click on Heat Admits It Needs Help for my new column, online now and shipping to Wednesday's paper. Your concurrence or dissent are welcome. Take a dip in our poll.

DOLPHINS LOSE OUT ON SHOCKEY: Free-agent tight end Jeremy Shockey -- the ex-cane who wanted dearly to sign with the Dolphins -- is saying this afternoon he is signing with Carolina. Whether Miami showed no interest or was outbid, this is a big missed chance for the Dolphins at a position of need.

MAKING HENNE AND HOCUTT SQUIRM: My newspaper's pulp edition has two interesting pieces today: A news story on Dolphin QB Chad Henne's early dealings with his new offensive coordinator, and a column on the departure of UM athletic director Kirby Hocutt. They are interesting mainly because they might leave some readers wondering if the subjects were treated fairly. Let's discuss. 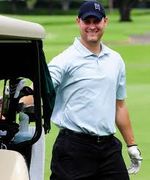 Henne's meetings with Brian Daboll vs. NFL rules: The QB casually mentioned to reporters, at a golf tournament, "I've been meeting with [Daboll] for the last month now." Oops. One of the offseason rules is that before March 15 players can use team facilities but not meet with coaches. Cote sez: It isn't the media's job to "protect" local players or teams. This was worth reporting. However, I thought it significant that this story was displayed on page 2D and that the headline ('Henne optimistic about new offense') clearly downplayed the rules-violation aspect. Why? Because this isn't a very big deal. If it were it would have been a front-page story with a hard-hitting headline. Whether the league fines or penalizes the Dolphins over this will say a lot. I would not expect any penalty.

Le Batard says Hocutt put himself over UM in coach-search: The column implies Kirby Hocutt knew while searching for Randy Shannon's replacement he coveted the Texas Tech AD job and therefore steered clear of interviewing Mike Leach or Tommy Tuberville. The premise: That would have been unpopular at Tech and hindered Hocutt's chances to be hired there, with Tuberville the current Tech coach and Leach an ex-coach suing the school. Cote sez: Le Batard has the right in an opinion column to raise the question, but it presumes Tuberville and Leach were obvious candidates who should have been interviewed and the fact they weren't smells funny. That isn't an easy sell. Tuberville is an ex-UM assistant coming off an 8-5 season and Miami (after Shannon) wanted a clean break from recycling a guy who'd been here. Leach is controversial; it wasn't at all surprising image- and brand-minded UM steered clear. Le Batard wrote a good, thought-provoking column, but the reader must judge if it answered whether Hocutt cheated UM on his own behalf.

ON CHEERING IN THE PRESS BOX: Tom Bowles, a freelance NASCAR correspondent for SI.com, says he was fired because he was among journalists who openly cheered as 20-year-old Trevor Bayne won the Daytona 500. I was there. I heard the cheers. I did not add my voice or applause, yet I understood it. I did not feel then, or think now, that it was worthy of condemnation, or firing. What I heard, to me, was a bunch of human beings responding emotionally and without premeditation to a fantastic finish that made for a great, almost unbelievable story. That's all. It's always weird to me that I am allowed to applaud a good story in print, in effect, but not audibly. At the same time I understand the sports writer mandate against "cheering in the press box." It is justified. We are paid, neutral observers, not fans. The mandate is particularly needed in team-sport press boxes. How ludicrous would it be if Jets writers cheered a Mark Sanchez TD pass and soon afterward Dolphins writers roared with delight when Sanchez was picked off? Can't have that. Period. There are always small times, though, when I think it's OK for a journalist to let his heart show. I cannot feel I have violated some sacred law if an emotional rendition of the national anthem moves me to applaud the singer, for example. I felt a lot of things, but shame not one of them, when I joined the applause for Dan Marino after his retirement press conference. Yes, I see that NASCAR writers spontaneously applauding the finish of the Daytona 500 might have been unprofessional, but in the most heartfelt, forgivable way.

JASON TAYLOR, DAMIEN WOODY & DOLPHINS: The stinkin' Jets are purging veterans to cut salary as the NFL lockout looms, and the interesting available names are Jason Taylor and Damien Woody. Might the Dolphins re-sign JT? It would be a sentimental nod, but a shock, too. Won't happen. The best hope is they ceremonially re-sign him for a day and let him retire a Dolphin as was done with Zach Thomas. Even that is a bit doubtful. More intriguing is the possibility of Woody (pictured). He is 33 but can play center, guard and right tackle, a solid and versatile veteran who could really fill an interior-line need. If he can pass a physical and comes cheap, why not? 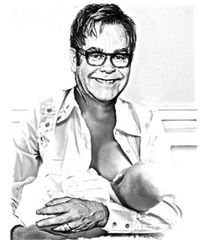 DEAR GREG...: "...Your blog is OK but would be better if occasionally you would show controversial and somewhat creepy artwork that depicts Elton John breastfeeding his new surrogate baby. Thank you."