TAX DOLLARS FOR DOLPHINS STADIUM UPGRADES? THE POLL: I wish the Dolphins would think more about playing in Super Bowls and less about hosting them, but whether taxpayers should substantially fund almost $200 million in stadium upgrades to attract future SBs is a valid question. I think public investment should be finite. For example, if the Marlins in eight years say they want to upgrade their new ballpark, the club should be on its own for that. In the Dolphins' case the question is complicated by the fact the stadium was privately built (by the late, great Joe Robbie) and previous major upgrades were privately assumed (by Wayne Huizenga). So public investment in the stadium has been minimal. Still, the inclination here is to think Stephen M. Ross and his suite of celebrity part-owners should be the ones footing the majority of the bill. Your thoughts welcome. Take dip in our poll.

DOLPHINS' 17-0 SAFER THAN EVER: Don Shula should be smiling as the NFL moves ever closer to an 18-game regular season (from the current 16). It will mean a team would have to go 21-0 instead of 19-0 to equal Miami's 1972 Perfect Season. I have always tended to think Miami will have to share its unique perch someday, but am beginning to feel more and more the opposite.

MARLINS' MINI-VUVUZELA DISASTER: The Marlins marketing guy who dreamed up the vuvuzela-like horn giveaway at this past Saturday's game must be pretty proud for having unleashed an embarrassing evening that had even Marlins players complaining. I mean, other stadiums are banning these horns, and the Marlins give away 15,000 of them? It was a nightmare; both teams hated the noise, and the club now needs to ban its own giveaway item. I'm not sure which was worse: the giveaway itself, or club president David Samson claiming the next day the promotion "absolutely worked." Also from that memorable night, the batting-order snafu might not have been Fredi Gonzalez's fault, but it's his responsibility. I am not happy to say that I think if this season continues as a non-playoff year and a managerial change is made, that gave the firing squad a bit of ammo. Finally, the Marlin bullpen's 11 walks in five innings was a plain embarrassment.

ALL HAIL JOSH JOHNSON: On a brighter note, Marlinheads, Josh Johnson is really, really good, and his current streak -- eight straight starts giving up zero or one run -- deserves more attention than it is getting. Which is why I wrote this column online now and shipping to Tuesday's pulp edition. Since 1900, there have been 18 perfect games pitched. Since 1900, what Johnson has done has been accomplished only eight times. 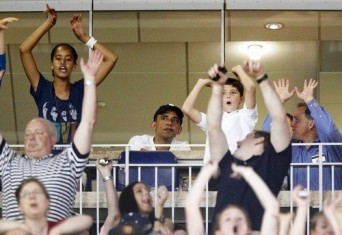 OBAMA TAKES RIGHTEOUS STAND, SITS DURING 'WAVE': At a recent Nationals game, President Barack Obama conspicuously did not participate in "The Wave," which everyone thinks is passe' and wishes would go away except The Wavers themselves, many of whom are drunk. We want our presidents to be or at least appear dignified. People doing The Wave do not appear dignified. It is physically impossible to stand and throw your arms spastically in the air while shouting "Whoaaaa!" and appear dignified at the same time. If you were to start a list of things a president of the United States should not be seen doing in public, The Wave and farting very possibly would top that list.

ANTI-TIGER SENTIMENT EASING?: Well, probably in general, but not with the guy who rented the plane that carried this banner over the weekend U.S. Open at Pebble Beach. By the way, Dustin Johnson, the guy who led going into the last round but shot 82? He looked like me on that one three-hole, six-over stretch. Who had the more embarrassing weekend: Dustin or the imploding French World Cup soccer

NICK SABAN SAYS SORRY. SORT OF: Alabama coach Nick Saban, in a new interview with The Sporting News, apologizes somewhat (and somewhat tardily) for the way he left the Dolphins following the 2006 season. Most all will recall that amid the skullduggery he stated flatly, "I'm not going to be the Alabama coach," prior to becoming the Alabama coach. The money quote: "Would I manage it differently. Absolutely." And: "I do apologize for any professional mishandling that might have occured." Saban also notes that he "made the organization better." Which might be debatable, considering what he left for Cam Cameroon finished 1-15. And considering it was on Saban's watch that Miami infamously chose Daunte Culpepper over Drew Brees. Give Saban credit for his semi-regret and qualified apology. He's still a bit of weasel, though.

BP OIL-SPILL ART: The unnatural disaster in the Gulf Coast is entering its third month with no end in sight. I'd imagine some people might think the poster pictured is in bad taste. But I don't see it as making fun of the awful plight of birds and fish. I see it as closer to political art that is anti-British Petroleum, and therefore alright by me.

RADIO WARS: Somebody told me they heard WQAM's Sid Rosenberg crowing on the air about beating 790 The Ticket's Dan Le Batard head to head in the latest ratings book. Two thoughts: 1) Both shows are very different, and very good. 2) Sid's winning rating was 2.4 to Dan's 2.2. Shouldn't there be a rule that 5.0 or better is a prerequisite for any bragging whatsoever?

THE LIST: DOLPHINS' FATHERS AND SONS: Fathers and sons who have played or coached with the Dolphins, chronologically based on father: