« Hanley rips Fredi: "He can do whatever he f---ing wants"; plus 790 wins Sports Radio Wars & more | Main | You rate Zach Thomas & Jason Taylor's Hall of Fame chances (with polls) »

ZACH THOMAS RETIRES A DOLPHIN: An emotional, grateful and characteristically classy Zach Thomas officially retired as a Dolphin yesterday. I was there and you'd click Farewell Zach for my column that is online in Friday's paper. It is an unabashed ode and appreciation. Zach was one of the nicest. most grounded, most real people I have had the pleasure to cover on any team in any sport. I wish him only the best. What a terrific career and terrific guy.

MARLINS' HANLEY DRAMA PUT TO BED: Sorry seems to be the hardest word, but Hanley Ramirez mustered an apology yesterday before the win in St. Louis. Earlier he had told ESPNDeportes.com: “I’m sorry that all this got so ugly. My intent was not to cause a distraction. I’m sorry that things got this heated. The team, the fans don’t deserve it. We are all professionals here and we’re pulling for the same side. I’ll try to close this chapter and focus on playing baseball.” Hall of Famers Andre Dawson and Tony Perez, bohit club executives, met privately with Ramirez, and Dawson didn't mince words, blasting the younger player for showing up his manager. Click here for the great story of that meeting in the Palm Beach Post.

HERE'S THE SOLUTION TO HANLEY VS. FREDI: Quick recap: Star Hanley Ramirez loafs in game, gets called out and benched by manager Fredi Gonzalez. Hanley fires back, rips Fredi. Now Fredi wants Hanley to apologize to team, but Hanley sulks, seems disinclined. Stalemate! The manager is right in this and the player is wrong. If you don't believe it, click on Fredi Sends Right Message for the column by me. But let's move on. The only pertinent question now is:

What now? What's next?

I broker peace with a three-point plan.

1. No ridiculous overreaction please. You already hear the knee-jerk "trade Hanley!" huffing on local sports-rant radio. Stop it! Take a deep breath. This could turn out to be a blip (albeit a potentially staining one) on the young man's career timeline. Hanley is only 26 and is signed long-term. He is the game's most gifted player at one of its key positions. You do not stop counting on him as a franchise cornerstone just because he is not the Derek Jeter/Cal Ripken model in terms of perfect personality/ideal teammate.

2. Marlins, do not be intractable. Don't draw a line in cement that will harden and cause a permanent rift. Yes, Hanley must apologize in some way, but let the definition of that be flexible. Must he stand up on a soapbox in the middle of the clubhouse? Must he admit he dogged it Monday night? To me it would be enough if Hanley apologizes personally to his manager and tells his teammates (not necessarily en masse) that he regrets his overreaction and the distraction it created.

3. Hanley, step up and be a man. You didn't give full effort Monday night, for whatever reason, then you overreacted horribly Tuesday in a fountain of immaturity. Look that in the eye. Take ownership. Make amends and move on. There is an olive branch on the table, but it is yours to pick up and extend, not the manager's or the team's. Oh, and you might also tip a cap to the fans in whatever version of a mea culpa you can manage. Did you hear them booing? They want to embrace you. Give them a reason.

SUMMARY: The Marlins need Ramirez too much, in this 2010 playoff chase and beyond, to allow this tempest to sour what should be a long and fruitful relationship. The manager and club are on the righteous side of this, but still must find a way to have their best player content mentally and on the field. Hanley? He must mind that he doesn't invite a national perception that he is, well, a head-case. Potential endorsement dollars run away from you with stuff like that. More important, so does the respect of teammates and fans. It's OK to be eccentric ("Hanley being Hanley"), but not when it involves effort and leaves a clubhouse sour. You are great player, Hanley. Is it too much to ask that you be a good guy, too?

BRANDON MARSHALL PICKS NUMBER, SITS WITH HIP: The number might not be permanent but for Wednesday's practice he chose 19 -- Ted Ginn's old number. Big footsteps, Brandon!  :)  Also it turned out Marshall has undergone minor hip surgery and might miss minicamps and not practice until training camp. This is where my media brethren and some fans make like that's a huge, ominous deal even though it really isn't a very big deal at all.

WORLD CUP ODDS: Got World Cup Fever yet? Getting close, amigos. Latest odds from BetUS.com have Spain a narrow favorite at 4/1 followed closely by Brazil 9/2 and England 11/2. Then it's Argentina 7/1 and Germany and Italy both 10/1. The USA is midpack, tied for 14th of 32 nations at 60/1.

LEBRON GETS TITILLATING ENTICEMENT: Can I say that in a blog? Apparently so. New York's famous and shamelessly publicity-seeking Scores "gentleman's club" entices LeBron James to sign with the Knicks by offering him a lifetime pass for free lap dances. Seriously. What's good about that is, the poor fella could never afford that on his own! (Thinking a New York male strip club should chime in with a similar offer to LeBron's mother, based on recent suggestions of her amorous side). Anyway, time for the 305 to step up for LeBron. Where my Miami strip clubs at!?

RIMA FAKIH TAKES POLE POSITION: The above reminds me. The newly crowned Miss USA, Michigan's Rima Fakih (pictured), caused a stir when it came out she'd posed for pix on a stripper pole a few years ago. Amazing what passes for a scandal these days. I think if pole dancing became part of the competition, ratings for beauty pageants would return to their 1970's heyday. 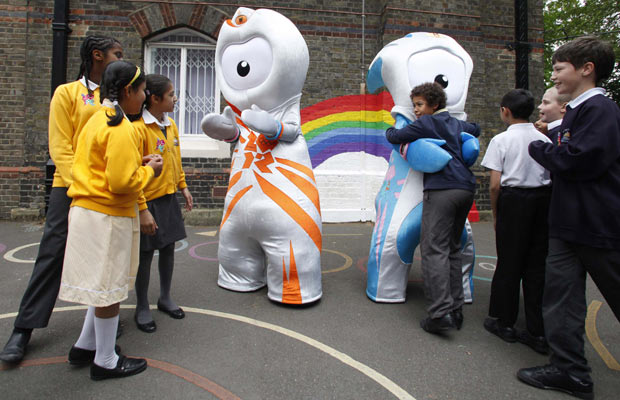 LONDON UNVEILS CRUMMY MASCOTS: The London 2012 Olympics committee unveils its mascots Wenlock and Mandeville (pictured above molesting area schoolchildren), their shapes as odd as their names. When and why did mascots gradually transmogrify from cuddly animal likenesses to unidentifiable and at times creepy-looking blobs?

THE LIST: DOLPHIN 19'S: Should Brandon Marshall keep No. 19, here are the five previous players in Dolphins history to wear that numeral, listed chronologically:

[Blognote: Our "Sports Radio Wars" champion is declared and it's 790 The Ticket over WQAM. See poll results in post directly below this one].