[Thanks to all who tapped into Live-Chat Wednesday! Do it from 1-2 p.m. every week. Click here to join live or to post questions any time throughout the week].

THE TIGER COLUMN: Today's column by me defending Tiger Woods -- not on the philandering (!), but on his Friday mea culpa -- is drawing a huge response. It is the most-read thing on all of MiamiHerald.com today, and it is generating a ton of email as well. Therefore I thought I'd invite commentary in this blog forum as well. Click here to read the column. Weigh in if you'd like.

HANLEY RAMIREZ: GENTLEMAN RANCHER: The Marlins star alerted the media today at spring training that he has built a working ranch 35 miles outside Santo Domingo in the Dominican Republic. Pictured at right is an exclusive photographic depiction of what Hanley would look like overseeing his Dominican ranch if he looked like this guy.

[Joyful Tuesday update: Tamiami has been named the safest neighborhood in Greater Miami by neighborhoodscout.com. Tamiamians have only a 1 in 370 chance of being a crime victim in any one year. I didn't say this was an intersting update. Only a joyful one]

THREE AND A HALF QUICK DOLPHIN THOUGHTS: 1. Peter King, who knows as much about the NFL as anyone, says estranged Broncos wide receiver Brandon Marshall (pictured) can be had for a second-round pick. Miami happens to have both a second-round pick and a throbbing need at WR. Snap! Get it done, Tuna. Remember, a big talent who's high maintenance is preferable to Ted Ginn with a great attitude. Git'r done! Your thoughts welcome. Take a dip in our poll.

[Blognote: The above is our latest poll to blast past 1,000 votes in its first day. Thanks and keep 'em coming!]

2. Chad Pennington is a wanted man. Various speculative reports indicate he could be wanted as a backup by the Jets, Lions or Bucs, and possibly as a starter in St. Louis or Arizona, where trust in Matt Leinart would fit in a thumble. Part of that is that this year's free-agent QB crop is so weak that Pennington looks good by comparison. The thing is, Miami had better compete to keep him as Chad Henne's backup, because the alternative is two of the scariest words imaginable to a Dolfan: Pat White.

3. Cornerback Will Allen, arrested for DUI after allegedly driving drunk up to a police blockade and mentioning he needed to get past. Wow. If the bust is legit, I think ol' Will has just provided a fresh new answer in the category, How To Know If You Are Driving Impaired.

3.5. The Pats franchise-tagging nose tackle Vince Wilfork and removing him from free agency is not a huge loss for the Dolphins, in that Miami likely would not have spent the millions required to sign a guy turning 29 this season.

SORE-LOSER CANADIANS: There are media reports that some bitterly disappointed Canadian fans were chanting "[Bleep] USA! [Bleep] USA!" toward the end of Sunday's 5-3 upset hockey loss to the Americans in the Vancouver Olympics. I am surprised the Canadians are such sore losers, having had so much practice at losing and all.

WE HATE THE WINTER OLYMPICS: The Miami/Fort Lauderdale TV market ranks 54th of 55 monitored U.S. cities/regions in Vancouver Games viewership. Dead last is New Orleans because, between Super Bowl hangover and Mardi Gras, the entire city is too drunk to find the remote. Loved this line by Jimmy Kimmel: "Skiing. Snowboarding. Ice skating. These are not sports. They're vacation activities. I feel like I'm watching someone's home movies." 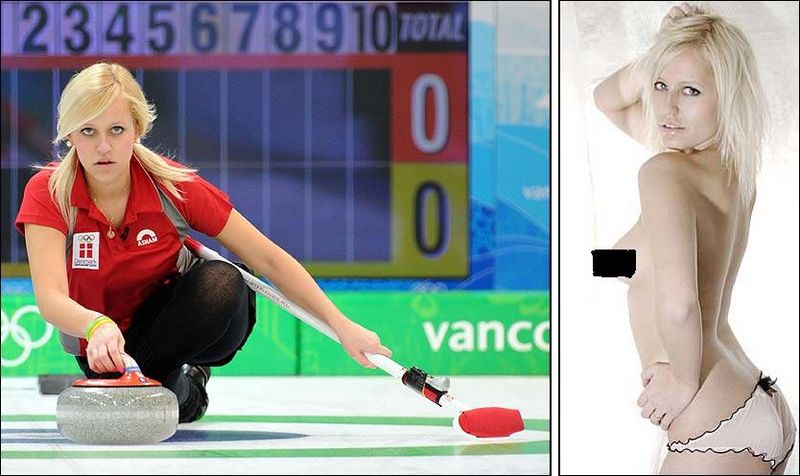 AND YET, SUDDENLY, I LOVE CURLING: Used to hate curling like anybody else, because nothing involving brooms and women five months pregnant can possibly be considered a sport. But now I love curling. That's because I now have a favorite player, Madeleine Dupont of Denmark, who has raised eyebrows by posing topless for a European curling-federation calendar. I personally do not care to know the dates of any upcoming curling matches, but would be pleased to have the calendar just in case.

MORE BIG NUDES: MICHAEL VICK: Nude curling. That reminds me. Playgirl magazine has offered a $1 million donation to PETA if Michael Vick will pose nude in the magazine. DALAI LAMA ON TIGER WOODS: Tibet's exiled spiritual leader said (click here) that he had never heard of Tiger Woods in a brief weekend interview from his hotel suite in Beverly Hills. Still trying to decide what's more ludicrous: That anyone who spends a great deal of time in the U.S. hasn't heard of Tiger Woods. Or that a spiritual leader would require the lavish trappings of a Beverly Hills suite. (Pictured left, apropos of nothing, a Tiger Mardi Gras float lampooning his infidelity and fall from grace). 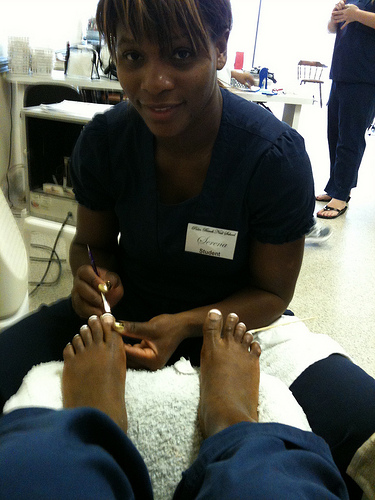 SERENA'S FALLBACK CAREER: Palm Beach-based tennis star Serena Williams reveals on her Twitter site that she is taking classes (pictured right) to learn how to be a nail technician. As in giving manicures. As in trimming other people's toenails. This is either an inventively orchestrated gag or just about the most bizarre thing I can recall a millionaire athlete doing since Ricky Williams quit the NFL to go live in a tent in the Australian outback. Either way, points to Serena.

CAN DOWN SYNDROME EVER BE FAIR GAME FOR HUMOR?: This is about a scene from Family Guy in which Chris is dating a young woman with Down Syndrome -- the voiceover done by an actress with Down Syndrome, if that matters. Click here for a bit of the scene, which needles Sarah Palin, and for Palin's reaction.

HEADLINES YOU NEVER THOUGHT YOU'D SEE (one in a series): Click here. The other possibility is to keep the design like it is, and teach your young child the concept of taking small bites and chewing.

DEAR GREG...: ..."Your blog's OK, but would be better if occasionally you would show an airline safety-card depicting Willy Wonka making an emergency exit. Thank you."