Over his back spasms, Beno Udrih wants to provide Heat with some veteran leadership at point guard

The Miami Heat have eight guards on the roster, but there aren't many you can really call a true point guard. 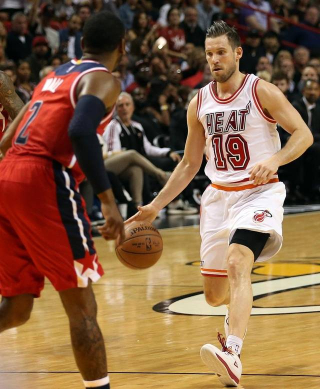 Veteran Beno Udrih and rookie Briante Weber are about the only ones who qualify for the tag.

While Weber has logged 33 combined minutes in Miami's first two preseason games (7 points, 6 assists, 2 turnovers), it looks like Udrih, dealing with tightness in his back since the third day of training camp in the Bahamas, is finally ready to start playing in games this week.

The 34-year-old journeyman went through a full contact practice on Monday morning and could see some minutes in tonight's "Red, White and Pink" scrimmage at AmericanAirlines Arena.

"I'm not 100 percent, but I definitely feel a lot better," Udrih said. "Obviously I lost a little bit of conditioning these last couple of days. But I’m working hard to get that back. I should be fine [for Tuesday's third preseason game against the Brooklyn Nets]."

Udrih hasn't played in a game since Feb. 22. His season ended when he had surgery to repair a torn plantar plate in his right foot. A week later, he agreed to a buyout agreement with Miami, leaving $90,000 on the table so the Heat could get under the luxury tax and veteran All-Star Joe Johnson for its playoff run.

The move angered other teams around the league. It only got worse after Udrih resigned with the Heat this off-season for a guaranteed $1.4 million. Udrih told our Barry Jackson last month he did it just to help the Heat since he couldn't help them on the court.

Now, he wants to help them again with what he believes he can still do on the court -- provide a steadying hand in a fast-paced offense. He certainly did that last year when Goran Dragic missed eight games with a calf injury in January, helping keep the Heat afloat. After being acquired from Memphis in the Mario Chalmers trade, Udrih finished his 36-game stint with the Heat averaging 4.4 points, 2.5 assists and 1.2 turnovers in 16.3 minutes

"I’m just going to be me, try to be consistent and bring some leadership, some pace to the game and maybe with that leadership and experience that I gained during the last 12, 13 years, just slow things down sometimes," he said Monday. "Sometimes, maybe, we play a little bit too fast."

Whether or not Udrih makes the final roster or even plays a significant role for the Heat remains to be seen. Weber, 23, is not only a younger option, but coach Erik Spoelstra has been pushing more and more to put combo guards on the court.

In the Heat's first two preseason games he's started Dragic and Tyler Johnson in the backcourt and then brought in Dion Waiters off the bench to share in a playmaking type role with either Dragic or Johnson. Weber hasn't gotten on the floor this preseason until at least two of those three head to the bench.

"This game has evolved to the point where you need three or four playmakers on the floor together," Spoelstra said. "We do like the strength of our versatility of this roster. Multiple guys can put the ball on the floor and make plays. You are already seeing that in the first two games. It's becoming very necessary in this league the way some of the bigs are playing and switching and protecting the paint.

"If [Udrih's] healthy he'll get some of those minutes. But I also want to continue to see Tyler play the combo spots. There's a lot of things to look at. There really are."

NEWS AND NOTES FROM MONDAY

"We're familiar with Tyler," Spoelstra said. "It helps fast-track. I would say any lineup right now, I wouldn't look too much into it. But I really like what Tyler is bringing us. He's playing both guard positions, feels very comfortable at either [guard] spot now. And that's important.

"I think it's important we utilize his versatility," Spoelstra continued. "And with that second unit, it really would be a challenge to say who the point guard is."

> Through two preseason games there have not been many moments where Dragic and Waiters have been on the floor together. Would Spoelstra like to see more of that moving forward?

"Yeah, but I've been able to look at it in practice," he said. "There's a lot of things I'm looking at. That's one of them."

Waiters said Monday he would like to play with Dragic more in games moving forward.

"We really haven't played that much together," he said. "Hopefully we do. But, we can't control that. We only can control what we can control and that's when our number gets called going out there and doing what we need to do."

> What happens when Josh Richardson returns from injury?

"We'll get to that point when we're there," Spoelstra said. "That's the strength and ultimately the necessity of this roster -- ultimately it's the versatility. Guys have to be able to play in different spots and different positions on the floor. We talk about it all the time, but it's reality. J-Rich is used to that. He literally he can play anywhere -- the three perimeter positions offensively and defensively."

> Spoelstra said the Heat continue to ignore using a timetable with Richardson's return. Why? Because they don't want him to rush back.

"There's no pain in all that he's doing," Spoelstra said. "We just want to make sure we keep it that way."