« Hassan Whiteside to miss Tuesday's game vs. Magic after the death of his great grandmother | Main | Dwyane Wade talks about the Heat in long sit down interview with Sports Illustrated »

The Hot Five: What's real and what isn't with the Heat?

My take on a series of hot-button Heat-related topics following Miami's 107-77 win over the Orlando Magic and with two games left in the preseason:

Q: Is the Heat really interested in trading Goran Dragic to Sacramento for Rudy Gay? 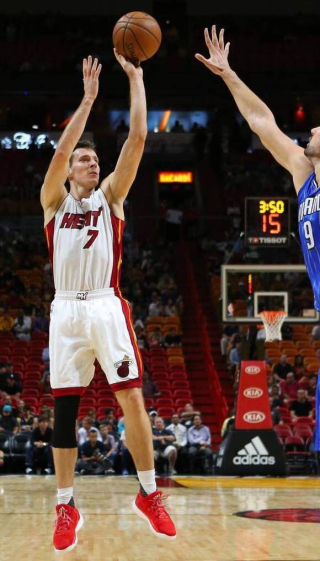 The immediate answer is no. The long term answer could be yes. From everything I've heard consistently throughout this summer, Pat Riley, 71, doesn't want to sit on his hands and watch the Heat fade into irrelevance. And despite the surplus of available top-end free agents next summer, he knows landing a big fish won't be easy for this Heat team without an established franchise player like he had before in Dwyane Wade. So, Riley is very much looking to make a trade or two to net a whale and begin pushing the Heat toward another championship run. That said, he doesn't have many assets right now having traded away most of the Heat's picks already to build the Big 3 and then to acquire Dragic.

So, could he trade Dragic? Absolutely. Making a deal with Sacramento for Gay, who could opt of his contract next summer, would free up an additional $14 million in cap space for Riley to work with, potentially giving the Heat more than $50 million to use overall if Chris Bosh's contract is also wiped off the books. In the end, that could be enough to land two whales.

But in this instance (and from what I've been told over and over again since the summer) Riley wants to see what he has with Dragic pushing the pace and a young, supporting cast around him. If the Heat comes out of the gate and flops after 20 games (Riley has referred to 20 games as his barometer in the past), then trading Dragic for Gay (or to another team with draft picks and a player with an equal expiring contract) would make sense. But if Miami finds something unique here -- small ball with athleticism and a dominant center -- that is competitive and on the path toward a championship, then Riley probably won't blow it up. Instead, he could tinker and just find one whale in free agency this summer to replace Bosh.

Q: What can we honestly take away from the Heat's 4-2 preseason start?

Erik Spoelstra has been adamant that we can't really read too much into preseason results since teams are usually working through issues and rotations and teams are often sitting their best players to keep them healthy for when the games really count. That said, the Heat's win at San Antonio last Friday was impressive even with LaMarcus Aldridge out. Miami's starters and regular rotation players held the Spurs -- with Kawhi Leonard and Tony Parker -- to 39 percent shooting through three quarters and had a 20-point lead heading into the fourth quarter.

What's real about this Heat team is its depth at guard, versatility at power forward and improved three-point shooting.

Miami is shooting 40.1 percent from beyond the arc this preseason and has reached double figures in three-pointers made in five of its six games. After being one of the worst three-point shooting teams in the league last year, the Heat is finally playing like everyone else in the league is and it's helping stretch the floor for Dragic and Hassan Whiteside, who have told me repeatedly this preseason they can't believe how much space they have to work with.

It's completely different than it was just a few months ago when the Charlotte Hornets and Toronto Raptors packed the paint against the Heat in the playoffs and dared Miami to shoot.

What's also real? Nobody is being selfish right now. I asked Dion Waiters (whose reputation for selfishness before coming to the Heat was well-established) Tuesday if it's important for him to start.

His response: "I can't answer that right now," he said. "At the end of the day, it's not about Dion right now."

Go ahead and pick your jaw up off the floor.

Q: Speaking of Dion Waiters, will he be the starting shooting guard for the Heat this season?

Probably in the season opener and the first few games of the season, but once he returns from injury I expect Josh Richardson to move into that role. 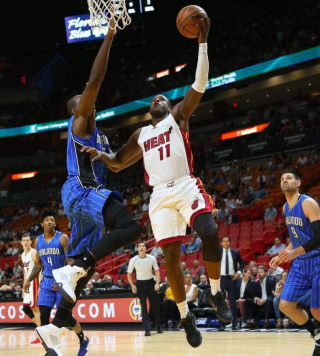 Part of what Spoelstra has done this preseason by having Waiters come off the bench in the Heat's first three games and then start the last three is have him buy into the notion he can be effective as a starter or as a sixth man. For much of the early part of his career, Waiters was hung up on issues like starting or being relegated to the bench. His attitude often reflected where he was in the pecking order with the Cavs and Thunder.

Spoelstra is erasing that notion, making him buy into the team concept and telling him it will eventually pay off for him when he can opt of his contract next summer and earn a bigger pay day. Waiters is doing his own part too. He acknowledged before camp even began he wanted to play for a team that could deliver tough love and tap into his talents.

Just listen to Spoelstra's response following Tuesday's game when I asked him which Waiters he likes better -- the starter or the sixth man.

"Right now what I've told him is to continue to try to get better and commit to the things that are important to us and I think he’s really been making an effort to do that," Spoelstra said. "He's been making a lot of multiple efforts defensively. He’s making an impact on that side of the floor. He’s being aggressive, but letting the game come to him, making the game easier for other people on the other side of the floor. It's three games of [starting], but again, don't look at any of these lineups too much. Guys are out. I'm just looking at whatever we can with the guys that are available.”

That last part makes me feel like he's speaking code for -- don't pay attention to the lineups because Richardson will be back soon.

It's early. Very early. But it's clear Johnson isn't the same hot mess at point guard he was last season when Spoelstra threw him to wolves in January when Dragic went down with a calf injury and Miami badly needed point guard help. 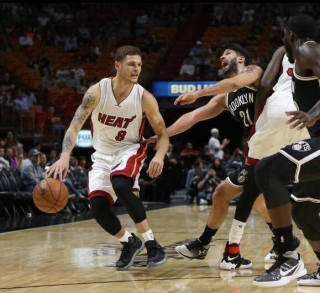 Johnson has 14 assists and only one turnover this preseason and he says the game is finally beginning to slow down for him a little bit when he's at the point. Spoelstra has had a big hand in that, making sure Johnson was running the point in practice regularly since camp began and making it Johnson's focus this summer.

"You can drill it was much as you want, but until you're in the situation -- I need these reps, these game reps," Johnson said. "In practice it's good for me to get a feel for what guy's tendencies are. But in the game, using my voice and being able to get guys in the right position and just knowing where I need to be is probably the biggest difference."

With guard the real strength of this Heat team, the ideal situation for the team is for Johnson to thrive as a backup point guard, scoring and sharing the playmaking duties with Waiters, basically continuing what the starting lineup does with Dragic and Richardson. And Johnson has no problem coming off the bench -- even after signing that $50 million deal this summer.

"I definitely feel comfortable coming off the bench," he said Tuesday. "It gives me a chance to see the game; see how things are going, and then I can come in and kind of add my own. If I need to inject energy or if I need to speed up the pace a little bit, I can do that."

Having Johnson be a legitimate starting caliber point guard not only makes his four-year, $50 million contract worthwhile for the Heat, but it also makes trading Dragic away easier.

Q: Has Rodney McGruder pushed his way into contention for the Heat's final roster spot?

It looks that way.

When I asked Erik Spoelstra on Monday if the battle for the 15th and final roster spot was between veteran point guard Beno Udrih and 23-year-old defensive dynamo Briante Weber he told me it wasn't. At the time I thought it was just coach speak to avoid the issue.

But on Tuesday it was McGruder -- and not Weber or Udrih -- who made his way into the game first off the bench. In fact, McGruder came in with 2:38 left in the opening quarter for Dion Waiters and ended up playing 23 minutes. He scored eight points and had two assists without a turnover. He finished plus-29 for the game.

Udrih, meanwhile, didn't play even though he was healthy. And Weber played 13 minutes, entering late in the third quarter. He had five points, three assists and four turnovers.

"I thought Rodney was so rock solid," Spoelstra said afterward. "I don't even know what his stat line was, but he does so many things to help you win on both ends of the court. He really plays with a focused intensity. [That's] tough to teach."

That sounds like a ringing endorsement. But before we get carried away, McGruder is shooting 39.5 percent from the field, 31.3 percent from three-point range and has played 17.1 minutes -- most of which has come on nights when the regulars are on the bench or when they've sat out entirely.

Weber, meanwhile, leads the NBA in steals (17) this preseason. Although he's made nearly as many turnovers (14) as assists (16), he gives the Heat something it doesn't have otherwise on the roster -- a top-notch defender on opposing point guards. The Heat, meanwhile, has a lot of combo guards.

And although Udrih hasn't played much at all this preseason, Spoelstra values what he brings as a steady hand to the offense as a true backup point guard.