The Heat on Monday made its first roster move of the preseason, waiving rookie forward Stefan Jankovic and adding shot-blocking center Vashil Fernandez to the roster. 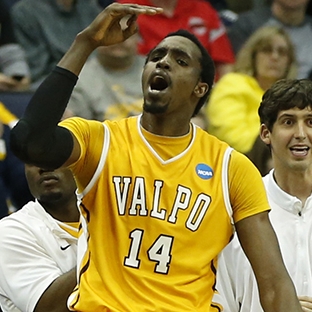 While there's an outside chance Jankovic could be picked up by another NBA team, Monday's move was made to help beef up the franchise's D-League affiliate, the Sioux Falls Skyforce.

By picking up Fernandez Monday, the Heat can assign both him and Jankovic to the Skyforce's roster since both will have spent the majority of the preseason with the Heat and Miami would own both of their affiliate rights, Heat general manager Andy Elisburg explained.

The only way the Heat would lose out on either player was if they made an NBA roster for another team after this weekend's round of roster cuts league wide, which is unlikely for two undrafted rookies.

All NBA teams must trim their rosters to the regular-season limit of 15 by next Monday. Miami currently has 20 players on the roster.

"First of all I'm just thankful to God to get the opportunity," Fernandez said Monday after practice. "I've been working out all summer, and the Heat, I'm grateful they want me to be a part of their program. They love shot-blockers like Hassan [Whiteside] and Alonzo Mourning. I'm just excited to be here and to be able to be a part of this organization, be able to grow and get better each year.

"If the Heat want me to be here and go get some development, I'm willing to do whatever it takes to get better to get to the highest level."

The all-time leading shot blocker at Valparaiso, Fernandez (6-10, 260) was the NCAA leader in blocks last season (3.31 per game) and was named the Horizon League Defensive Player of the Year for the second year in a row. He averaged 5.6 points (on fewer than five shots a game) and 7.3 rebounds last season as a senior, finishing his career with 289 blocks in four seasons. The 24-year-old Jamaican native will wear number 14 with the Heat.

According to this NCAA feature story on Fernandez, he grew up in a three bedroom house with 15 kids and three adults and he didn't pick up a basketball until he was 17. He also earned master's degrees in international economics and finance and international commerce and policy in college.

Coach Erik Spoelstra said Fernandez worked out with the Heat in September and was a player the organization liked.

Since his workout with the Heat, Fernandez said he's spent the past month at home in Austin, Texas, working out and waiting for an NBA team to call him. Fernandez said he had one pre-draft workout with Portland Trail Blazers and another with the Toronto Raptors he wasn't able to get to because of "a flight situation."

"He's a long, athletic, high energy, shot blocking big that we've seemed to have some success with before," Spoelstra said. "We'll take a look at him the next few days."

As for Jankovic, who received a $100,000 guarantee on his partially guaranteed contract as an undrafted rookie out of Hawaii this summer , the Heat remain high on him. Spoelstra said it was just unfortunate the 6-11, 234-pound stretch power forward was slowed by an ankle injury this preseason. Jankovic played only 3 minutes and 40 seconds in Friday's win over the Spurs, missing two shots.

"We spent a lot of time developing him this summer and we wanted to spend as much time as possible in summer league and a couple months after that," Spoelstra said. "It was unfortunate that he sprained his ankle and he wasn't able to participate too much in training camp. But we are encouraged by the development he made before that. Now, comes the next decision and that's really in his hands rights now. But we'd like to continue the relationship with him.

"We hope to continue the relationship with majority of these guys," Spoelstra continued later. "Ideally, with the new collective bargaining agreement we can keep the relationship going with at least a couple of them. We do invest that time. Guys come here for a reason. The relationships we have with a lot of the agents, they see that the staff will commit to [their players] regardless if they even play in the preseason. We've invested a lot of staff time, even this summer with Stefan with the hope we can continue the relationship and that's not a guarantee either way. It does make it tough, but also it's changing now where it's really becoming a developmental minor league. So these guys do see that it's a transition a lot of times, not necessarily a cut."