« Babbitt still dealing with tight groin; J-Rich progressing, but a return for the season opener unlikely | Main | The Hot Five: What's real and what isn't with the Heat? »

Hassan Whiteside to miss Tuesday's game vs. Magic after the death of his great grandmother

Hassan Whiteside will not play Tuesday night against the Orlando Magic and has returned home to North Carolina to be with his family following the death of his great grandmother. 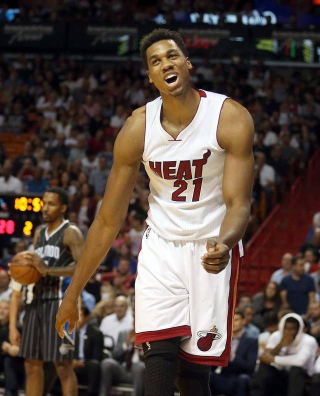 "He's going through some tough times. But we're there for him," teammate Goran Dragic said Monday. "I can't wait to see him back."

Whiteside will rejoin the Heat on Thursday when the team plays at Charlotte, coach Erik Spoelstra said.

Miami will also likely be without forwards Justise Winslow (back) and Luke Babbitt (groin) when it faces the Magic at 7:30 p.m. AmericanAirlines Arena Tuesday.

Spoelstra said Winslow would be a game-time decision and that Babbitt would get the night off for precautionary reasons after going through shoot-around on Tuesday. Winslow is the only Heat player that has started all five games this preseason.

"If it was his decision he would play," Spoelstra said of Babbitt. "But we want to give it another night."

Spoelstra said he feels like he's seen enough of the Heat through it's first five preseason games to not have to worry so much about studying rotations and instead can put health and well-being at the forefront of concerns.

Miami opens the season Oct. 26 in Orlando and wraps up the preseason with back-to-back games Thursday at Charlotte and at home Friday against the Philadelphia 76ers.

"I think we're still going to move forward with the plan that we've had," Spoelstra said. "It also depends on who is available. I'd like to get guys as many reps to build that continuity. But I don't I feel like I need to have an official dress rehearsal. I just want to continue to have us look at things and move forward. Three games will be good for us."