Babbitt still dealing with tight groin; J-Rich progressing, but a return for the season opener unlikely

Coach Erik Spoelstra has gone with Derrick Williams as his starting power forward for the last three preseason games, but he made it clear Monday he's still not ready to give the former No. 2 overall pick the starting job just yet. 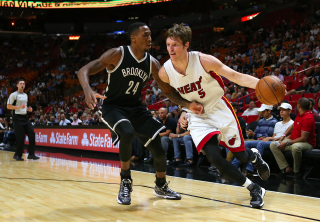 "I'm not really at that point right now," Spoelstra said. "We're developing him and his minutes and his confidence right now until he understands our system. But I did like the way he played this weekend. To be frank, I may have gone back to Luke [Babbitt] on Saturday if he was healthy to give that another look as well."

Babbitt, who started the Heat's preseason opener and is an enticing option for Spoelstra because of his dangerous three-point shooting touch, missed last weekend's back-to-back games in San Antonio and Louisville with a tight right groin.

Monday, Babbitt participated in some non-contact drills, but said the groin is still not up to par. His goal now is just to try and return before the preseason ends on Friday, when the Heat play the final leg of a three games in four nights stretch against the Philadelphia 76ers.

"I don't think it's really that serious," Babbitt said Monday of his tight groin, an injury he says he's never had before. "It's just real tight and I just want to treat it before it becomes a lingering issue. I didn't go through the full practice today, but my goal would be to get back out there as soon as I can.

"I'm real conscious of wanting to be out there right now, developing a chemistry with the guys. I take this preseason real seriously. I'm doing everything I can to get out there ASAP. At the same time with a tight groin muscle it's something I don't want have lingering into the regular season."

> Spoelstra said guard Josh Richardson, who has been recovering from a partially torn MCL in his right knee since Sept. 9, was "able to get out there and do a decent portion of the non-contact work" Monday.

But it's clear the Heat are not going to push him very hard to be ready for the season opener on Oct. 26. The team prefers he heals correctly and avoids a setback.

"I think it would be a very optimistic, aggressive schedule," Spoelstra responded when asked if it's realistic to think Richardson could play in the opener. "We want to make sure he's feeling full comfortable, fully conditioned and that he really trusts his leg. He's never been really injured before. So, that's also new to him."

The original diagnosis for Richardson's recovery was six to eight weeks. He said he was hopeful he would be able to make it back in time for the opener, but at the same time didn't know that he would.

Last week Richardson began taking "soft" jump shots. He's said during camp in the Bahamas that once he returns he'll wear a brace on his right knee at least until he's fully confident he's recovered from the injury.

> Spoelstra said he won't necessarily treat the final week of the preseason any differently in terms of getting guys minutes and establishing rotations.

"I don't feel that I really need to play a full rotation," he said. "We did as much as we possibly could of that in San Antonio. So, I'll balance that while still trying to evaluate some of the younger guys. And also I want to make sure our guys are feeling really good, healthy and fresh for that first game."