« Notes and quotes from Tuesday's Heat practice in the Bahamas | Main | Hassan Whiteside: "I'm a great passer. I just have to show you all." »

NASSAU, Bahamas -- Anthony Carter, the former Heat player whose agent famously failed to notify the team he would be exercising his $4.1 million player option for the 2003-04 season, thus opening the door for Pat Riley to sign Lamar Odom and then trade him and a package of players for Shaquille O'Neal, rejoined the franchise last week when he agreed to become an assistant with the organization's Development League affiliate the Sioux Falls Skyforce. 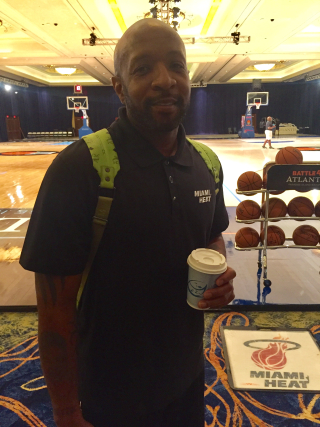 "It's just a great feeling," Carter, 41, told the Miami Herald Tuesday of rejoining the franchise that helped get his NBA career started. "Thursday when I flew out to meet Spo [coach Erik Spoelstra] it was like nothing changed. We already had a history and just by being here on the first day it's just a great feeling. I fit right in."

Carter spent four seasons with the Heat mostly as a backup point guard. But his most famous contribution was hitting the game-winning shot in a Game 3 playoff win over the Knicks at Madison Square Garden back in 2000. When he was back with the Heat as a player, Spoelstra was an assistant to Riley, helping in the film room and with on-court player development.

"I just remember he did a lot of video stuff," Carter said. "Him and Stan [Van Gundy] were on the court with us and he was like Stan's assistant."

Spoelstra said Wednesday he loves having former Heat players on the coaching staff. He already had two former players on his staff before Carter joined the Heat: Juwan Howard and Chris Quinn.

"They bring something that's very necessary -- they've been in that locker room," Spoelstra said. "AC really was one of my first guys when I was an assistant coach that I worked with. Unfortunately, then, I don't think I had the skill set to really help. But we were able to spend a lot of time as an assistant and as a player. We've always kept a little bit in touch. He's a fabric guy."

Carter, who spent 14 seasons in the NBA with six different teams, joins the Skyforce coaching staff after serving as an assistant coach for the Sacramento Kings during the 2015-16 season. Prior to his time under George Karl, Carter was an assistant coach for the Austin Spurs of the NBA Development League for two seasons. This coming season Carter will serve under Nevada Smith, who takes over as head coach of the Skyforce for Dan Craig.

"I'm mostly going to be on the defensive side of the ball, putting videos together and trying to get guys better on the court, keep their heads sane," Carter said of his job duties. "If they get a call-up [to the NBA] they'll be ready and I'll make sure their heads are up. Because I've been through the same things they've been through as far as playing in the CBA, getting called-up, not getting a call up and being frustrated and I think by me being through that I can help them stay focused."

Spoelstra said Carter's smile is infectious and it's great to have it back in the organization.

"It's great to see him back in here," he said. "His energy is awesome. We already knew this, but just in talking to George Karl, and it's so true, when you walk in the gym and see Anthony Carter, you smile. He brings a great, positive energy with real quiet, toughness to him and I love that quality. So, I think it brings a good dynamic to Sioux Falls."

As for the infamous mistake Carter's agent Bill Duffy made back in 2003 that cost him more than $3 million, Carter said it's all ancient history. Duffy agreed to make it up to him years ago and has kept his word, paying him in installments over the years.