« What is the price for loyalty? Miami Heat may need to pay it | Main | Heat wrap up meeting with Kevin Durant and now the wait begins »

Why keeping Tyler Johnson will be tough for the Miami Heat

While the Miami Heat continue to pursue Kevin Durant and find a way to keep 12-time All-Star Dwyane Wade from fleeing elsewhere, the team’s own free agents continue to get plucked by rival suitors.

Sunday morning, Tyler Johnson agreed to a four-year, $50 million offer sheet with the Brooklyn Nets, according to Yahoo!’s The Vertical. Our Barry Jackson later confirmed the agreement through a source with direct knowledge of the deal. Jackson said the Nets are anticipating Johnson will sign with them because of the structure of the contract.

One Heat teammate, Josh Richardson, has already congratulated and said good-bye to Johnson.

congrats to my brother @RealTJohnson man. Ima miss my you bruh! Bougie boys for life 👌🏾

Any kid that wants to be an NBA player & you don't think you have a chance. Look no further then @RealTJohnson Congrts kid you earned it!

Once Johnson, 24, signs the offer sheet at the end of the free agent signing period moratorium on Thursday, the Heat will have three days to match the offer to retain the former undrafted NBA Development League combo guard or let him walk.

Johnson, who played 36 games last season and started five, would remain affordable for the Heat this coming season if Miami were to match the offer sheet because his salary cap hit would only be the team’s qualifying offer $1.2 million (even though Johnson would actually get paid $5.6 million his first year). But after that, Johnson’s salary cap hit for Miami would skyrocket to as much as $18.8 million and $19.6 million in the third and fourth years of his contract.

With the Heat already locked into deals worth $70.3 million for the 2018-19 season with Chris Bosh ($26.8 million), Hassan Whiteside ($25.4 million) and Goran Dragic ($18.1 million), it puts the Heat in the precarious position to make that kind of a commitment to Johnson, who only played in 36 regular season games last season and is coming off rotator cuff surgery in February. 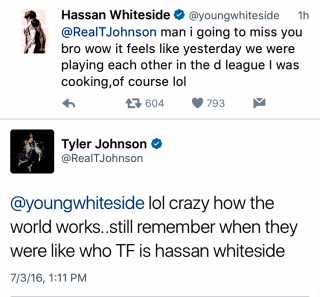 The last two seasons of Johnson’s contract would also be around the time the Heat would be looking for cap space to resign Richardson and Justise Winslow.

Still, Johnson, who made $845,000 last season with the Heat, clearly has value. He’s a 37.8 percent career three-point shooter, a player the Heat has invested time in developing, and a talent other teams clearly see potential in as well.  The Nets want to pair him up with new free agent acquisition Jeremy Lin in their starting back court.

Johnson was a rotation player last season for Miami before he went down with a shoulder injury in January. He returned in time for the playoffs and appeared in five games. He averaged 8.7 points, three rebounds and 2.2 assists in the regular seasn.

With the salary cap jumping from $70 million last season to $94.143 million this summer a long list of free agents are scoring big contracts. It’s also leaving the Heat, with only $20 million in cap space left after Whiteside agreed to a four-year, $98 million contract on Friday, in a tough spot to add quality depth to its roster.

If Durant were agree to sign with Miami, the Heat would have to trade Dragic and Josh McRoberts to create additional cap space to then offer Wade a respectable offer in the range of $14-$16 million. If Durant heads elsewhere, the Heat would have about $19 million it can offer Wade for next season and then would have to fill the rest of its roster using a $2.9 million room exception and free agents willing to sign for the league minimum.

For some perspective, former Heat reserves James Ennis and Justin Hamilton recently agreed to two-year deals with the Grizzlies and Nets paying them $3 million per season.