« Amare Stoudemire: "I would have loved to have played more" | Main | Justise Winslow named second-team all-rookie, Josh Richardson left off »

Could Luol Deng give the Heat a discount this summer? Maybe 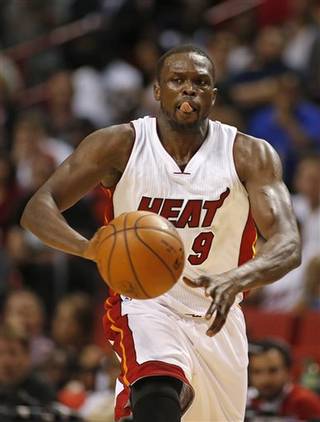 Luol Deng, once tabbed by Pat Riley as one of the most important free agent signings in Heat history, has sort of fallen to third in the pecking order behind Dwyane Wade and Hassan Whiteside when it comes to free agents Heat fans would like to see the team keep.

But his value in the second half of Miami's season can't be denied. With Chris Bosh out, Deng slid over from small forward to power forward and became a big part of the Heat's 19-10 second half surge.

In Miami's fast-paced offense, which finished fifth in scoring after the All-Star break, Deng was as valuable a sparkplug as any. He averaged 15.2 points, 8.1 rebounds and led Miami in plus/minus (+144). Then, in the first round against the Hornets, he and Wade led the Heat in scoring at 19.0 points per game before struggling some against the Raptors.

With only $40 million in salary cap space, the Heat probably won't have enough money to keep Deng around and give Wade and Whiteside sizeable contracts.

The truth is, Deng turned out be a pretty good bargain at $10 million this season.

So do the Heat have any realistic shot at getting a discount from Deng to stay here? Well, maybe after hearing him talk on Tuesday.

"It was great. I always say I enjoyed it," Deng said of his two-year stint with the Heat. "You learn so much. You go through different paths in your life obviously. I'm really appreciative of this. Not only did I enjoy playing basketball on the court, but off the court it's an amazing city. So much to do. People have been great. People are very supportive. The fans are just unbelievable. Everywhere you go people really love the Heat and appreciate everything you do.

"Here people notice how hard you play and how hard you work. For me, it's always been who I am. Just go out there and it never really mattered to me what my numbers looked like. What always mattered to me was to be able to do what I could do out there and play as hard as I can. I felt like people kind of noticed that here. So, I really enjoyed it."

Could that influence his future?

"Definitely," Deng said. "Like I said I enjoyed it here. I enjoyed every bit of it. So going forward obviously I would love to be here. It's something that we will sit down and discuss. I can't really say one bad thing about being here. I enjoyed my time. The one thing that I know about here is that it's an organization that wants to win and an organization that will support the players and what they do whether its on the court or off the court. My foundation got a lot of support, things I want to do in life. It's a lot more than just basketball here."

Is Deng at a point in his career philosophically where winning and staying with an organization are at least equal with financial considerations?

"Definitely," he said. "At the end of the day, I try to play the best that I can play, be the best player I can be and hear what everyone has to say and listen to teams. But for me, it's always about being comfortable, being in an organization and around people that really appreciate the things that I do. I think the financial part is what you discuss when you go into that room. There's a lot of teams out there that can offer you a lot of money, but the feel might not be the same and vice-versa. There could be teams that can't give you what the other team can, but they have a lot of other things they can support you with.

"I've been in this situation before when I came here. I remember choosing here and it wasn't really the financial [part that drew me]. It was really the fact I wanted to be comfortable and be somewhere where what I do is appreciated."

Of course, Deng says that now. But there are teams out there that would probably pay the 31-year-old veteran good coin to do what he does and to play in a system that might be better suited for him.

Remember, Deng wasn't involved in the Heat's offense when it was running through Chris Bosh and Wade in the first half of the season. All Deng pretty much did was stand in the corner and wait for the ball to find him.

If Bosh returns and plays again and Deng resigns with Miami, Deng would probably have to go back to that corner and play the small forward spot again.

In the end, Bosh's future with the Heat could ultimately be what makes Deng a real possibility of returning or not.