Hassan Whiteside, @NBA2K and my journey into video-game journalism

So, just a note — a pro tip, as they say nowadays — to all you would-be video-game journalists out there. Do not start an interview with two video-game producers by telling them you don't "really play video games anymore."

This is offensive, and should be avoided.

That's how I started my phone interview with the guys who upgraded Hassan Whiteside's player rating for NBA2K after Whiteside's triple-dozen against the Chicago Bulls. I was going for a full-disclosure type of admission — in the hopes of reporting some details I otherwise might have missed — but really it just made for the type of phone-conversation awkwardness that this age of text messengers can't fully appreciate.

[MUTUALLY THANKFUL CHANGING OF THE SUBJECT]

Of course, I do still play video games. I have Tetris on my iPhone, and I'm still, after all these years, like the Andre Miller of Ms. Pac-Man...

But real-life video-game producers don't want to hear about your Ms. Pac-Man skills, so I left that part out, and went straight into learning a little bit about these guys, and why they would cave to Whiteside's very public, overtly passive-aggressive request for an upgrade of his video-game self ... and other stuff, like, how common is a player-rating upgrade, and, what teams are the producers of NBA2K15 fans of?

Growing up in Iowa, Zach Timmerman didn’t have a pro basketball team in his home state. Like most kids in the Midwest without a specific team, he was a Chicago Bulls fan back in the day.

Michael Stauffer, who works with Timmerman on the video game NBA2K, loves everything Ohio, and that includes the Cleveland Cavaliers.

In other words, neither Timmerman nor Stauffer were exactly celebrating last Sunday while Whiteside was giving his best impersonation of Wilt Chamberlain against the Bulls. Still, Timmerman and Stauffer know talent when they see it, and they’re both dedicated to creating the most authentic basketball video game possible. Before Whiteside even mentioned his player rating on national television, both Timmerman and Stauffer were already on the case.

“Mike went immediately to work when that game was happening,” Timmerman said. 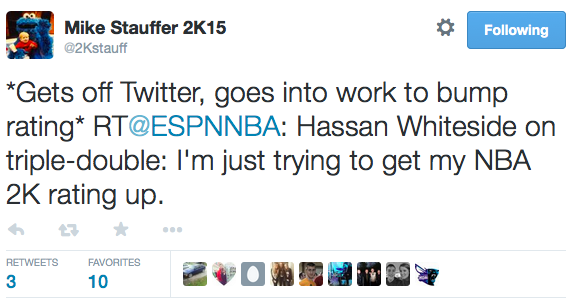 Timmerman and Stauffer are both producers of NBA2K, the hugely popular video game that, for many, is just as much a part of the NBA culture now as Adidas, Jordans or TNT. That means they pretty much play God each week as they update details of the video game. Young NBA players love the game just as much as young NBA fans, and some players, like Whiteside, are keenly aware of their current player ratings. Whiteside, for example, had been stewing over his video-game player rating since 2011.

OK, so let me backtrack here for those who aren't familiar with modern-day video games. I'm going to skip over the few years of technological advancements between Ms. Pac-Man and present-day gaming, gloss over some details and explain it all in two sentence. Most video-game consoles these days are wired to the Internet, which means some video games are constantly being updated and improved for gamers. So, for example, one day Dwyane Wade is in the starting lineup for the Heat in NBA2K, and then the next day, following a hamstring injury, Wade is out and unavailable.

In other words, lots of updates just to keep up with Wade's hammies.

If you want to be more specific, let' say one day J.R. Smith is with the New Knicks and then the next day he's with the Cavaliers...and not only does Smith switch teams on the video game, but his right elbow band has been removed, a left elbow small band has been added and, oh yeah, now Smith is wearing Nike LeBron XIIs because, well, that's what's happening in real life.

Timmerman and Stauffer think of everything, and just so they don't miss anything happening in the league on a daily basis, they constantly take suggestions and tips from basketball fans on Twitter. They also consult with teams and players while they're developing next year's game.

"It engulfs your life," Stauffer said.

That's where player ratings come in. What’s a player rating? It’s basically the aggregated numerical value of a player's video game basketball skills based on a rating system of zero to 100. Each individual skill gets a player rating and then the average of all those skill ratings is a player's overall rating. 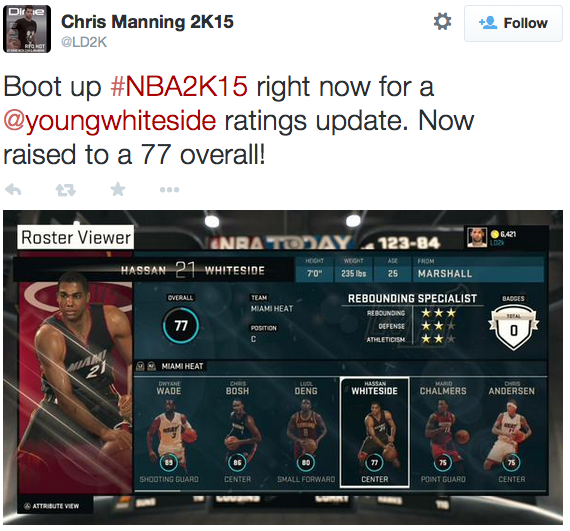 Whiteside's block rating was elevated to a 95 following his game against the Bulls. Did that rating go down after Whiteside failed to block a shot against the Bucks? No clue. Go buy the game.

Now, there's this whole business of ethics in video-game journalism. I hear it's a big deal, but, I don't really care about it. Sure, I can see how it would be important when it comes to reviewing games and stuff like that, but, personally, I don't need to actually play NBA 2K15 to know it's probably pretty fun. One interview with the producers had me convinced of that much. I suppose an important question a gamer might want to know from the producers of a game is how they stay objective when they're handing out ratings.

I didn't ask that question. I just assumed the whole anecdote about Timmerman and Stauffer being fans of the Bulls and Cavs, respectively, would spell that out. I did, however, ask what Whiteside could do to make his player rating go down a few points.

"Let's hope he doesn't do that," added Timmerman.