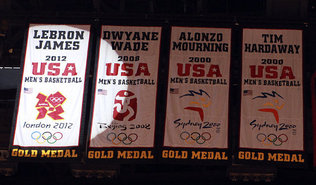 Three years into his stint in Miami and LeBron James' name is already hanging from the rafters inside AmericanAirlines Arena.

The Heat raised James' Olympic jersey on Saturday in the team's second home game of the season. Credit Pat Riley for the cool tradition.

James led Team USA to a gold medal. Dwyane Wade, Alonzo Mourning and Tim Hardaway also have their Olympic jerseys hanging in the arena. There has been at least one member of the Heat on each of the last four Olympic teams. James plans to captain Team USA once again in 2016. Will he still be with the Heat? James has a player option for 2015 and 2016.