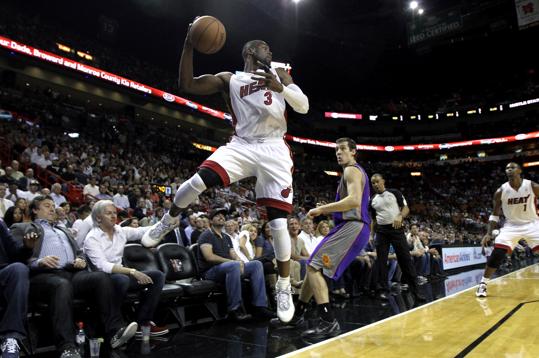 Dwyane Wade helped set the tone for a return of the Heat's signature defensive pressure against the Suns on Monday at AmericanAirlines Arena. The Heat defeated the Suns 124-99.

BEST OF THE NIGHT: Heat's defensive pressure
Miami started the game with a renewed commitment to defense after a pair of listless nights against New York and Denver. The Nuggets were 7 of 21 from three-point range and shot 39.8 percent from the field. LeBron James led the Heat with 11 rebounds and the Heat out-rebounded Phoenix 49-38. After allowing 70 points in the paint to the Nuggets, the Heat's defense gave up just 34 points in the pain to Phoenix.

WORST OF THE NIGHT: Michael Beasley 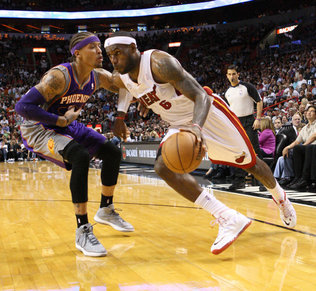 A pathetic game by the Heat's former lottery pick. He had seven points on 3 of 13 shooting to go along with one rebound and an assist.

Dwyane Wade on Beasley (before the game):

“He can score anywhere in the world. It’s just about what team is going to be best for him and can highlight what we can do and he fits in and feels comfortable with. Sometimes you get to a place and you’re around certain teammates and you just know that this is it and sometimes you’re just there and you’re just hoping you can get through the year, so it’s just about [Beasley] getting comfortable with his surroundings and where he is and just being comfortable in the player he is. I think that’s the biggest thing for him — just not trying to live up to the expectations of everyone else. You just got to be Michael Beasley and live with your own expectations first."

NIGHTLY NUMBER: 11
The number of assists by Mario Chalmers. Last season, Chalmers' high mark for assists was nine. He has had 11 assists in two of the Heat's first four games this season. Chalmers has five career double-digit assist games.

LINE OF THE NIGHT: Ray Allen had 15 points to go along with six rebounds and six assists. In his five seasons in Boston, Allen only matched those numbers once. Tom Haberstroh of ESPN.com unearthed he statistic and when he informed Allen of the night's significance, Allen said: "I'm glad I'm in Florida."

THEY SAID IT
ALVIN GENTRY, SUNS COACH
“They're a great team. There is a reason they have a ring and I think they are a much better team this year than they were last year.

ERIK SPOELSTRA ON THE DWYANE WADE
“Dwyane Wade was active tonight. He set the tone with this quick twitch on both ends of the court. He had some good lift, but he is spending a lot of time to put his body in position to respond. There is a lot of depth on this team and Dwyane Wade gets it. He might not have nights where he has to score thirty five or forty points plus, but with the opportunities that he has, he can generate a lot of easy opportunities for us.”

MARIO CHALMERS ON RUNNING THE POINT
“I feel like it’s in my hands a lot more.  I think Coach Spo is putting a lot of trust in me.  I am just trying to keep his trust.  I am still getting comfortable playing with Ray Allen and Rashard Lewis and just finding where they like to be at and finding them to knock down shots.”

DWYANE WADE
“To beat the best teams you are going to have to get stops.  What we are doing on the offensive end is being unselfish.  I’ve never seen so many guys get open threes because the ball is moving.”

CHRIS BOSH ON HIS 18 POINTS IN THE FIRST HALF
“I always envision myself getting off to a good start and setting an offensive tone for myself.  I pride myself on taking high-percentage shots.”

RAY ALLEN ON WADE, JAMES AND BOSH
“They know it is not just about three of them. It is about all of them.”

NIGHTLY ANALYSIS
The Heat's ball movement was a thing to behold on Monday. It was basketball as the game was meant to be played. Players whipped pass around the perimeter at high speed and finished with 47 field goals on 33 assists, a highly efficient set of numbers. Mario Chalmers dished out 11 assists. Eight different players scored three pointers and the Heat was 15 of 26 from distance. For the Heat, it all starts with defense and the focused energy against the Suns helped the players find offensive rhythm early.

ABOUT THE OTHER GUYS
Marcin Gortat recorded his third double-double in the Suns' first four games. He had 12 points and 13 rebounds.

--Mario Chalmers moved ahead of Glen Rice for seventh all-time in franchise history in assists (1,076).

--LeBron had his second double-double of the season (23 points, 11 rebounds) and six of his career against the Suns.

--LeBron has scored at least 20 points in each of the Heat's first four games. He has scored in double figures in 423 consecutive games, the most among active players. Durant is second with 246.

MILESTONES
--Ray Allen's 15 points pushed him past the 23,000 mark for points in his career. Only three active players have more points: Kobe, K.G. and Dirk.

--The victory against the Suns came on the Heat's 25th anniversary as a franchise.