« Barkley having fun with Heat on SNL | Main | LeBron named Player of the Week ... again »

POSTCARDS: When in San Francisco, take time to smell the redwoods

SAN FRANCISCO -- So, here is today's story on the Heat. CLICK ME!

Other than traveling from New York to San Francisco and writing the story about how the Heat is pretty much the best team in the NBA right now, I had the day off on Sunday. Well, half a day thanks to a direct flight from JFK to SFO. 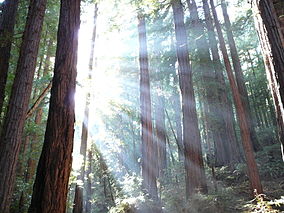 ANYWAY, with my half a day, I ventured out and hiked around Muir Woods. I realize walking around and staring up at coastal redwoods has nothing to do with the Heat (other than the fact that staring up at human redwoods is what I do every day), but this is my blog, so I can write about whatever I want. I'll be writing some "postcard blogs" from time to time and this is the first.

Muir Woods was named after the great naturalist and adventurer John Muir. Basically, Muir hiked around and wrote about it. Here's what he said about Muir Woods after it was named in his honor: "This is the best tree-lovers monument that could possibly be found in all the forests of the world." I believe the message got out, because of the few hundred people I walked past during the excursion, I was pretty much the only guy from this country.

Muir Woods is nestled in a small valley near the coast just north of San Francisco. If you've seen the last scene of the new Planet of the Apes movie -- "Caesar is home." -- then you've seen Muir Woods. The majesty of the place is breathtaking. Needless to say, being surrounded by the smells and shadows of the largest living organisms I've ever seen had a profound effect on my sensibility. It's humbling. Like reading Shakespeare for the first time, or watching LeBron soar through the air at 100 mph and dunk a basketball. This is the best there is, kiddo!

The upshot of hiking around Muir Woods on Sunday afternoon was missing Tim Tebow's big win against the Steelers. Hey, sometimes you've got to marvel at God's handiwork rather than watch football (no offense, Tebow.) Caught a nice sunset overlooking the Pacific Ocean after the hike. No wonder they call it the Golden Gate Bridge!

--Check back later today (probably around 6 p.m.) for updates from the Heat's practice.