After watching the Heat struggle just to get past the Bobcats, it's clear any game can be a difficult one on the road for Miami.

Friday's against Minnesota could be quite interesting, then, because the T-Wolves have potential coming from just about everywhere.

For starters, you can expect an early dose of Darko Milicic, who has a big height advantage over Joel Anthony and an effective hook shot.

Kevin Love can stretch the defense with his three-point shooting, which hasn't been very good yet this season (1 of 7 for the year) but is a legitimate part of his game.

Then you throw in the scoring ability from the wing with Michael Beasley and rookie Derrick Williams, the three-point shooting of Wesley Johnson, the gnat-like, floppish annoyance of J.J. Barea (although 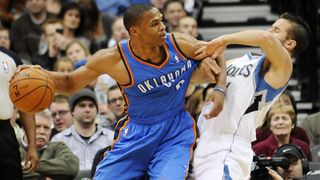 a hamstring injury might keep him out of the game) and the passing ability of Ricky Rubio, and it adds up to a team that could score with the Heat -- especially after you just saw Miami give up 60 points in the first half to the Bobcats.

The Target Center was pretty amped in Minnesota's opening game against OKC, which ended in a close loss for the Wolves. And this second home game should have a similar, if not more intense, atmosphere.

LeBron James should be able to put together a good game, though, given that either Beasley or Johnson will defend him early, with only Anthony Tolliver as a decent defensive option off the bench. The Wolves have been going small often in the backcourt, with some combination of Barea, Rubio and Luke Ridnour playing together. That means either a small defender on Wade, or a helpless rookie (Rubio) for segments of the game.