Should the Heat keep Mike Miller?

The new collective bargaining agreement calls for an amnesty clause that will allow teams to dump players who aren't performing up to their contracts. The Heat's most likely amnesty candidate is forward Mike Miller, who recently put his house up for sale.

So, what exactly is the amnesty clause? It's basically a one time, get-out-of-jail-free card. Under the new CBA, teams will most likely be able to cut a player and most of his contract (75 percent has been reported) will not be factored into the salary cap or luxury tax. In other words, there will be a lot of shuffling the first week of the season ... if there is a season, of course. 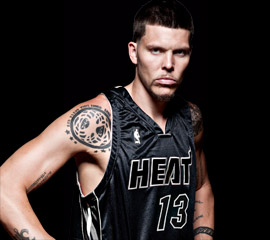 A few big-name players likely will be cut from teams, including Baron Davis (Cleveland), Gilbet Arenas (Orlando), Rashard Lewis (Washington) and Brandon Roy (Portland). (Before you ask, yes these players would immediately become free agents.) Anyway, the Heat will likely take a long look at releasing Miller, who is under contract for $24 million over the next four seasons.

Two freakish injuries to Miller's thumbs, a history of concussions and an injured shoulder limited Miller in his first season with the Heat. He had offseason surgery on one thumb and the shoulder after having surgery on the other thumb just before the start of last season. Should the Heat release Miller? That's the tough question facing Pat Riley.

Under normal circumstances, the answer would be an easy one: Miller would stay based upon the size of his contract. I mean, the Heat's ownership has plenty of money but it's not about to throw away nearly $25 million just because Miller had one bad year. But these are not normal times for the Heat. Far from it. This is the Big 3 Era and the Heat wants to win the title this season, especially after losing in the Finals to Dallas. The Heat could cut Miller and use the cap space to bring in a healthy shooter.

Still, a strong case can be made for keeping Miller. He's a fierce competitor who battled through injuries last season and gave the maximum effort. His shot might have been off, but his defense, rebounding and basketball acumen shined at times in the postseason. What if Miller bounces back this season and regains his form as one of the game's best three-point shooters? All things considered, it might be in the Heat's best interest to keep him.