For those who believed this would be a high-scoring, free-flowing, fastbreak series, take THAT!

Two teams shooting less than 40 percent, no one scoring more than 27 points AND Juwan Howard getting eight minutes and MVP chants.

Not exactly how the prognosticators had this one playing out.

But if you'd watched the defenses the Mavs have played against these playoffs, you had to assume they'd struggle against this athletic Heat defense. And such was the case.

Chris Bosh said the defense that kept the Mavericks to 37.3 percent shooting, that "limited" Dirk Nowitzki to 27 points and the Mavericks vaunted bench to 17 points was pretty much par for the course.

It wasn't all great for the Heat, of course. Dwyane Wade looked like the same Wade from the Bulls series through two-plus quarters. It wasn't, really, until the fourth quarter that he looked confident and in rhythm. You would assume that could transfer to the start of the next game, but Wade finished Games 4 and 5 against Chicago strong as well, but it didn't continue in the next game.

Wade should be able to score on either Jason Terry or Jason Kidd, but he seemed oddly hesitant several times.

"He's such an explosive offensive player, he spoils you a little bit," Bosh said of Wade. "He's a major part of this team's offense. Anytime that he's going, it's great." 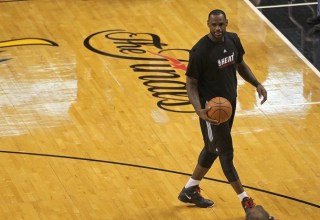 Nowitzki's night was uneven, at best. He did his best work in the fourth, with 10 points, but he never got into a consistent rhythm, either. Udonis Haslem was his typical good self defending Dirk, but so was Joel Anthony. LeBron James didn't defend Dirk, as many projected, and if the bigs do this kind of job against him, that probably shouldn't change.

"He's got to be denied the ball virtually everywhere on the floor," Carlisle said. "Haslem is a guy that has the wherewithal to do that. And they're going to play him aggressively, and we know that.

"We just to keep playing our game, keep getting him the ball and giving him opportunities to create."

By the way, Dirk has a torn tendon on the middle finger of his left hand and is wearing a splint, while Mike Miller left the locker room with his left arm in a sling. He obviously has a shoulder injury, but no one's really acknowledging it.

Back to the Heat offense for a second. Heat can't rely on LeBron hitting four of five threes, even if a couple of them were so open he had to shoot a commercial first. Wade needs to be more consistent, Bosh needs to be less clumsy against that zone and more assertive with his jumper, and LeBron needs to shoot more than two free throws.

As is, Shawn Marion believes the Mavericks did exactly what they needed to do to win.

"It was a completely halfcourt game tonight, and they prevailed," Marion said. "You hold a team to 38 percent and 92 points, for us, that's normally a victory."