« Different story | Main | And then there's that »

It's probably a waste of energy to get upset over a column that is not only a blatant attempt at grabbing attention but is frankly uninformed nonsense, but sometimes you just can't help it.

A certain writer for a national sports website wrote a column about LeBron James "shrinking" (it's not even worth linking to, but feel free to look it up) in these Finals. You might have seen the writer ask LeBron the question about "shrinking" in the Game 3 postgame press conference. 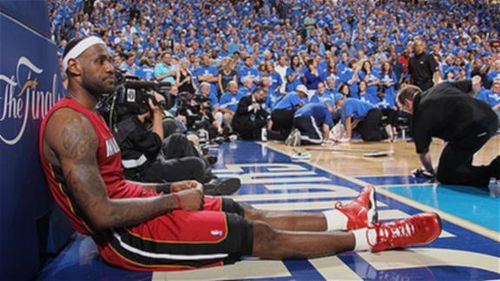 At this point it's almost expected for those to pile up on LeBron based on limited evidence and less knowledge. But there's just something about the timing of this one (and also because it included a ridiculous dig at The Miami Herald) that got me going. It got a lot of people going here in Dallas. As in, "Good lord, that was awful."

The crux of it is this: LeBron has been average in the Finals, especially in these last two games. The idea of LeBron not even being a superstar was thrown around in there, too.

It's convenient to choose now to be critical of LeBron. He's always going to be the whipping boy if the Heat lose, the way it did in Game 2. And he'll even be a target when the Heat win and someone else is doing most of the damage, which was the case in Game 3 with Dwyane Wade doing most of the scoring throughout and at the end.

But it's absolute nonsense to suggest LeBron has been anything but great in this run. And to say that he's "shrinking" in the Finals because it's the Finals is just the case of a writer jumping on an already loaded bus with about two minutes left in the ride.

Not only was LeBron playing the role he was better off playing in Game 3, a facilitator who picked up nine assists and displayed confidence in Mario Chalmers and Chris Bosh, but he continued to be the best defender in these playoffs.

One game after Jason Terry helped the Mavs come back from 15 down by scoring eight of Dallas' final 22 points, LeBron shut down Terry in the fourth quarter. Terry was scoreless, leaving Dirk Nowitzki to carry the team on his own. If LeBron keeps this up in next regular season, he'll very likely supplant Dwight Howard as league's Defensive Player of the Year.

So to suggest he's anything less than a superstar is utterly ridiculous. He might not have gotten to the line but four times in Game 3 after promising to be aggressive, but the main reason for that is that Dallas simply failed to foul him enough as he was attacking the rim. James set the tone for Miami's approach in that game, injuring the rim with some of his finishes. That was aggressive.

It just so happened Wade has his scoring touch going a bit more, and it resulted in him having the bigger game and the bigger finish.

LeBron had four turnovers, yes. One of those was a travel call that actually wasn't a travel (check the replay), another was an offensive foul call that comes from being aggressive, one was a bad pass and the last was a double-dribble call that he will defend forever because the ball was knocked out of his hands initially.

That's basically one turnover where a coach would say was a mistake. The rest were flow-of-the-game type of errors from a guy who's called upon to do much of the initiating of offense.

The rest of the criticisms come from idiotic ideas, like questioning whether he should've passed the ball to Bosh in a critical situation when Bosh was struggling. Well, Bosh was open, LeBron found him with a difficult pass, and the shot went in. Any other superstar who does that, he's playing unselfish, brilliant basketball.

Heck, people have been begging Kobe Bryant to do that for years in those situations.

The whole conversation is just ridiculous. So what if LeBron doesn't win the Finals MVP this time. He'll have a few more chances, that's for sure. And the Heat might not even be here right now if it wasn't for LeBron in the first place.

Actually, LeBron had the perfect answer today when asked if he feels like he can't win even when his team does.

Heard another interesting point from a respected colleague today. If people keep going over the top with these unfair criticisms of LeBron, eventually he'll turn into a sympathetic figure. One with plenty of rings, too.