Actually, that was the hardest thing to watch for an extended period.

Other than Dwyane Wade, there wasn't a whole lot working well for the Heat through the first 44 minutes or so. So James Jones made a three-pointer and turned the whole feel of the game. 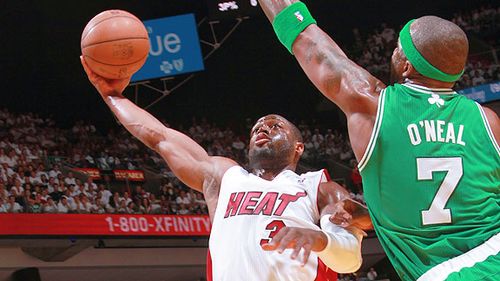 After that, though, it was an amazing display of talent and desire. Talent on the offensive end, as LeBron James made a pair of threes he'll never forget. Threes more memorable than even that buzzer-beater against Orlando a couple years ago, because that was just a desperate heave, and his Cavs lost that series anyway.

The desire came on the defensive end, as the Heat rattled the Celtics into misses and turnovers. Two plays that stand out were Jones' hard close on a wide-open Ray Allen. Ray still got off a good look, but that close may have disrupted his rhythm just enough. The second was the help Wade provided on the driving attempt from Jeff Green. It was perfectly timed and perfectly executed help from Wade.

And LeBron's steal and dunk to seal the win was both athleticism and desire rolled into one game-sealing highlight.

For a while there -- before Jones' three and the that sick 16-0 run to close the series -- it looked like Erik Spoelstra was making all the wrong calls. The Celtics had just one big guy in there to start the fourth, Nenad Krstic, and yet the Heat was still playing with both Chris Bosh and Juwan Howard. And when that Celtics lead ballooned to seven, he finally took out Howard, but brought in Joel Anthony. The game appeared to be begging for Jones. When he did finally bring in Jones, it was for Mario Chalmers instead of Anthony, but by then Kevin Garnett was back in the game, and Anthony was the best defender against him, so that was the right choice.

And because of that 16-0 run to end it, the supporting cast's performance looked a lot better. Howard led the non-Big-Three with five points. Anthony played great late defense on Garnett. And Jones had the biggest shot of the game, kicking off that final run.

The Celtics are done, and even though it wasn't the healthiest, most complete version of the Celtics, it feels like a huge accomplishment for this team.

It should also provide quite a confidence boost throughout the rest of the playoffs. Because the Celtics were everyone's bullies. And now it's the Heat that every team left in is probably fearing.