Go ahead and choose which one of these elements from Wednesday's game was most surprising, because this game was full of shockers.
--Udonis Haslem's performance: It wasn't so much that UD was able to score 13 points with five 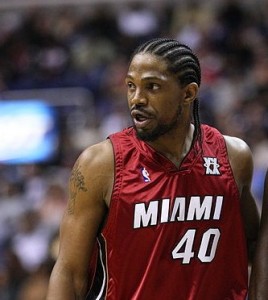 rebounds, two assists, a steal and a blocked shot. It was the way he did it, and the timeliness of it. And that he managed to play 23 minutes in two long bursts.
He single-handedly revived the Heat in the first half, and he helped the Heat maintain a lead while the Chicago crowd was about to explode.
Haslem had a facial dunk over Keith Bogans and another transition dunk on Derrick Rose. But it might have been his two jumpers -- two crucial jumpers -- that were most difficult. He hadn't hit one of those since before the foot injury, and to hit a pair in those spots in the second half was downright gutsy.
--The rest of the rotation: Erik Spoelstra spent the first half trying out players like women try on new shoes. But by the second half, he realized what was working. UD, of course. But also Mike Miller, who played 18 minutes, essentially in place of Mario Chalmers. Miller and Haslem, who weren't fully in the rotation until Wednesday, were the only Heat bench players to play more than five minutes. Meanwhile, Mike Bibby played 35 minutes. That's Mike Bibby, 35 minutes!
--The rebounding numbers: The Heat hadn't outrebounded the Bulls in four tries, and in the last game were embarrassed on the boards. This game, with Joel Anthony only playing 22 minutes and Jamaal Magloire playing five minutes, the Heat outrebounded the Bulls 45-41.
LeBron James had 10, Dwyane Wade nine, Chris Bosh eight and Miller had seven in his 18 minutes. The Bulls still managed 17 offensive rebounds, but that's because they missed 54 shots.
--The Heat defense: The Bulls shot 34 percent from the field and scored all of four points in the final 8:44 of the game. And here's how those four points were scored: Taj Gibson had his shot blocked going up for a dunk, and was hanging on the rim as it bounced off the backboard and back through the rim. So, technically, it shouldn't have counted.
The next two points were also Gibson, and again he had his shot blocked, but this time Anthony accidentally tapped it into the Bulls basket with the side of his hand. So if not for a missed call and an own-goal, the Bulls don't score at all in the final 8:44. What was Charles Barkley saying about the Bulls having the best defense he's ever seen?
This Heat defense is pretty good itself.