« Matching up with Bulls | Main | Rebound-able »

Is it as simple as effort?

The first three meeting between these two teams came down to single possessions, basically, and this one was a blowout because of what looked like simple effort.

So what's the solution? 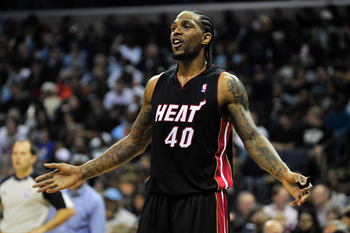 Well, other than just trying harder, the Heat might just be going to its go-to effort guy. That would be Udonis Haslem. It's difficult to expect extended segments of basketball from UD, but based on the fact that he played the final minutes of Sunday's game, you can pretty much infer that Erik Spoelstra's plan is to include Haslem into the rotation Wednesday.

Now, as much as the game came down to rebounding and poor performances from both LeBron James and Dwyane Wade, it also didn't help much that Spo went to a combination that hasn't seen the floor in forever -- if ever. Playing Jamaal Magloire might have sounded like a good idea, giving Derrick Rose another big body to go through before getting to the rim. But Cat can't rotate nearly fast enough to affect the lightning-quick Rose, or move quickly enough to keep the Bulls bigs off the boards.

Now, going to Udonis could help, because again, effort is his game and even though he's smaller, he's a rebounder and can hang with Joakim Noah and Carlos Boozer. But he is in no shape to do that for 30 minutes or more. But when Udonis can't do it, the Heat might need to stick to the smaller lineup when Joel Anthony is off the floor. Go with Chris Bosh at center and LeBron at the four. The Heat is quicker that way and can be disruptive defensively. And when LeBron is asked to rebound, he normally responds very well. It would be up to Bosh and LeBron to hit the boards and keep the Bulls off the offensive boards in that scenario, but that's not too much to ask of those guys.

If effort is the simple answer, then Game 1 was essentially a wake-up call for the Heat. If the issues go much deeper than that, then it will be evident again in Game 2. You can say that the Heat's offense looked awful against the Bulls, but then again, that's not the first time that's happened. The Heat offense has a way of recovering, starting with LeBron and Wade playing more like themselves.

We'll see if that all comes together.