The luxury of having three true superstars may have never been as meaningul to the Heat than it did Tuesday in Game 4.

Dwyane Wade was surprisingly bad, despite having his late-night shooting session late Monday, LeBron James hit an ugly cold spell highlighted by an airball three-pointer, and the rest of the Heat wasn't shooting particularly well as the Bulls took an 11-point lead in the third quarter. 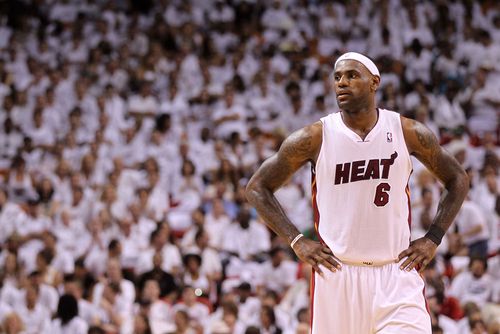 But unlike Derrick Rose, who has little to no help when defense is as intense as it is in this series, Wade had teammates to carry him past this particularly horrendous showing.

Chris Bosh is proving emotions don't get the best of him, even in the most stressful of situations. He had 10 huge points in the fourth quarter and overtime combined, he got to the foul line 11 times for the game and he was the only member of the Big Three to shoot 50 percent (6 of 12). Despite being largely ignored in the first half (actually he had to adjust to a more aggressive Bulls defense), Bosh finished with 22.

And of course, James was spectacular down the stretch, scoring 13 of his 35 after the third quarter. Toss in the surprising performance from Mike Miller (12 points and nine rebounds in 26 minutes) and Wade had just enough support to make up for his unusual performance.... (Miller, btw, was a +36 on the night, which is ridiculous. According to NBA.com, twenty other players have had a +36 or higher this season. Their teams won those games by an average of 40.4 points. Miller was +36 in an 8-point win.)

Just to emphasize the importance of such support, Rose had a largely awful night himself, needing 27 shots to score 23 points with just six assists, three rebounds and seven turnovers.

He didn't have the player next to him that was capable of making up for that. Luol Deng had a decent night with 20 points on 8 of 16 shooting, but he works largely off Rose. It's basically up to Rose to get Deng good looks.

Other telling numbers in this game: The Heat shot 38 free throws to Chicago's 22, prompting Tom Thibodeau to tweak the officials after the game, saying Rose didn't get enough calls.

Wade's four blocks were phenomenal, while LeBron's defense on Rose was critical. Just like his defense on Paul Pierce in Game 4 against Boston, it's what saved LeBron after a late turnover (offensive foul) in a critical game.