Chris Bosh had so many highlight moments in that Game 3 that it's hard to pick a most impressive segment.

It might just have to be his entire fourth quarter, which is a time of game Bosh rarely is dominant. That's normally reserved for LeBron James and Dwyane Wade, known to Carlos Boozer as the Heat's only two great players.

Bosh hit a variety of jump shots, each one, no matter how difficult, looked like it was good from the 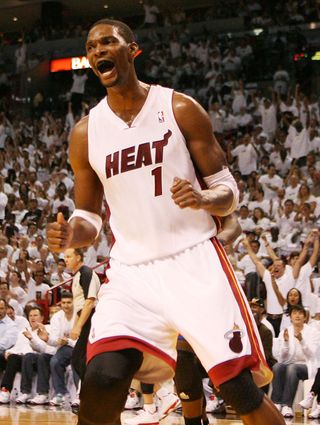 second he released them. He was hot, and he knew it.

The back-to-back pick-and-roll plays with Wade were pretty, especially the second one that included a spinning dribble and two-handed dunk.

Then he helped put the game away, essentially, with a tough rebound off a Luol Deng miss, a pair of free throws 16 seconds later, and a blocked shot of a Boozer layup.

Bosh offered mixed messages when asked if that motivates him in this series.

"Not really," he said. "We’ve been through so much in the regular season, that comments don’t really affect me too much. You can find inspiration in all different ways.

"It does nothing but help. I think about it when I’m shooting."

Sooo, he doesn't think about it, except when he's shooting? He just doesn't want to start a war of words. Guaranteed Bosh is highly motivated by that omission. He had two 30-point games all season. Now he has had two in three games. Not a coincidence, not a matchup advantage. Heck, Joakim Noah is one of the best defensive big men in the league.

Wade said Chris has been a different player since he heard of the Boozer comments.

"Any great player is going to respond." Wade said. "I was glad he said that about Chris because he came in with a different focus."

Bosh's performance was particularly big because Wade was far off his game (17 shots for 17 points, four turnovers, three assists) and because LeBron was being a facilitator (10 assists) instead of attacking much. LeBron said that he saw two defenders every time, so he didn't want to force it. And you could tell at the start of the fourth quarter that LeBron was making sure that plays drawn up for Bosh would be executed properly.

Couple nice games from Udonis Haslem and Mario Chalmers, also.Haslem took a big charge, and Chalmers played solid defense on Derrick Rose, who had two FGAs in the fourth quarter.