Let’s start with the game Sunday, then get to the bigger picture.

The foul against Mike Miller wasn’t a foul. Luol Deng tripped, but the official just saw Deng falling and Mike behind him and assumed he was pushed.

However, the bigger question might have been, who was responsible for boxing out Deng.

Both Miller and Dwyane Wade were outside the arc, but they’re allowed to come inside it on the release of the free throw. Yet both got caught up watching the initial bounce off the rim instead of immediately bodying up Deng. So when the ball got tipped back, Dwyane was kind in no-man’s land, and Miller was still behind Deng. 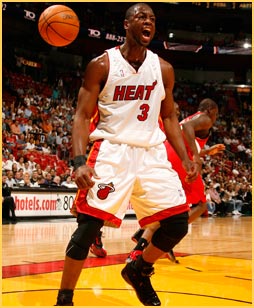 Not to make excuses for those guys, but it’s rare that ever comes into play, so it’s hard to just automatically box out the shooter instead of gravitating toward the ball.

Still, if the ref doesn’t call that foul, chances are the Heat gets the board and is on the free throw line to secure the win.

Now, to the bigger issues:

Among the post-game comments that drew concern is this one from Wade:

“I’m used to, of course, coming down in the fourth quarter, having the ball, making mistakes, getting a chance to make up for them,” Wade said. “So you’re just trying to get comfortable with whatever role you have to play at the moment, and you try to do your best at it.

“That was one of the things that we knew we had to do when we all decided to come together. Sacrifices had to be made.”

He basically said he’s still having issues adjusting to playing with LeBron James, who handles a lot of the late-game duties. In all the most recent late-game failures, Wade hasn’t really been involved – only getting that last shot Sunday because of an offensive rebound.

It’s almost as if their success playing together earlier this season was essentially while the team was blowing teams out. Once things get tight, then their comfort level together is still an issue.

And in late-game situations, one guy’s not passing to the other. It’s pretty much all LeBron or a kick to a shooter who’s not named Dwyane. Kind of defeats the purpose of playing together. 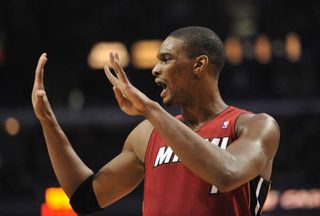 Chris Bosh has similar problems – a lack of opportunities. He was clearly more aggressive against the Bulls, scored 23 points but didn’t attempt a single shot in the final nine minutes or so of the fourth quarter. He was at his best – and the team played some of its best ball – when he was on the floor at the start of the second quarter without Wade or LeBron.

Bosh didn’t say, “I need the ball more,” but he did acknowledge that the team might not ride the hot hand often enough.

“I think we have to start realizing what’s working and just keep going at it, on offense and on defense,” he said.

Possibly the most disturbing comment was when Bosh said the team doesn’t have any idea what the issues are in the third quarters, which have been problematic lately.

“We’ve had a lot of third quarter lapses, and I think there has to be a common denominator,” Bosh said. “We’re all smart players. But to have halftime leads continue to be cut down, it’s a reoccurring thing right now. I don’t think we’ve addressed the problem yet. We have to find the problem first.

“You have to bring intelligence into the game at one point. But we’ll get there.”

I don’t think he intended anything particularly mean, but that right there says a lot.

I’m not suggesting the team is fragmenting. To the contrary, actually. The way they reacted following that heartbreaking loss shows they’re still a tight group.

But they’ve also got plenty of work to do in these last 20 games. Plenty.