--Kevin Durant said he doesn't consider himself in the running for MVP this season. 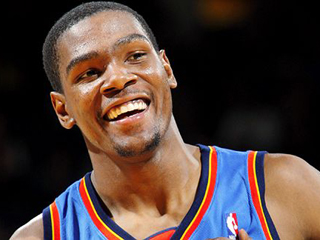 "I don't think I have a chance. My year to try to win it was last year," he said.

Last week, I thought LeBron James was at the top of the MVP race, with Dwight Howard following him and Derrick Rose right there as well. Now, I think Rose has once again elevated himself to the top because his performance against the Spurs is sticking in the minds of people. But I still believe, as long as LBJ outperforms Rose in the couple games the Heat and Bulls have left, he'll come out on top.

--Good to see Dorell Wright in the All-Star setting, especially because it's in his hometown of Los Angeles. It's not quite the All-Star Game, but the fact he has shot three-pointers well enough to get in the three-point contest says a lot about the work he has put in over the first six years of his career.

Dwyane Wade is particularly proud of his good friend.

"I’m happy for D-Wright being able to go to Golden State and showcase his talent," Wade said. "I couldn’t be prouder for him. Everything happens for a reason. I look forward to him going out here and representing his family and himself well."

--Joe Johnson said that if Carmelo Anthony "New York is going to be a monster. I think everybody knows that."

Well, not necessarily. If the Knicks give up Wilson Chandler, Danilo Gallinari and Raymond Felton for Carmelo and Chauncey Billups, that team still won't crack the top five in the East. And in the long run, the Knicks would be better off with Felton. Here's the only reason I think the Knicks are going to push to make this trade rather than wait for free agency to sign him.

If Carmelo ends up not signing the extension and then losing as much as $20 million because of the new collective bargaining agreement, 'Melo might just be upset at the Knicks for not getting it done at the deadline and costing him money. Then he might look at a team like the Clippers and go there, essentially to stick it to the Knicks.

--And for those who were wondering if it was Jason Jackson who Ray Allen was talking to in that exchange during the interviews, no it wasn't. I'm pretty sure Jax wouldn't let that go.

Ray Allen, arguably the nicest, most thoughtful player in the NBA, was in the middle of answering questions when a perfectly reasonable Heat-related question was asked by a Heat employee wearing a Heat polo and carrying microphone with the Heat logo on it.

“I don’t understand your question,” Allen said. “You have a Heat shirt on.”

He might have smiled as he said it, but he didn’t answer the question. Think he would’ve had the same response if it someone wearing a Hawks or a Knicks jersey? Doubtful.)