Riley Fires Back at Heat Critics

The start of the Miami Heat's 2010-11 training camp is still a couple of weeks away. 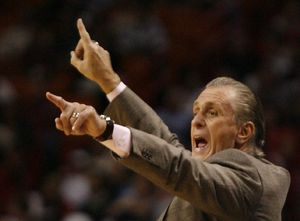 But team president Pat Riley was in intense playoff mode Friday while finally firing back at those who took painful shots at his team's free agency coup to lure LeBron James and Chris Bosh to join Dwyane Wade.

Speaking to select local beat writers during a 42-minute conference call, Riley addressed several issues facing the team entering the Sept. 27 start of training camp at AmericanAirlines Arena. But none of the subjects he addressed revealed more of his true feelings than his response to TNT's Charles Barkley, Orlando GM Otis Smith and Magic coach Stan Van Gundy.

All three had plenty to say about the Heat and some of its players after James and Bosh shook up the NBA's landscape and joined forces with Wade in Miami. Magic Johnson, Michael Jordan and several current and former players also launched shots at how this version of the Heat came together. 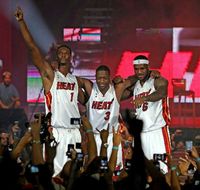 "I think all these people should get a life. I really do." Riley said of the general, league-wide backlash aimed at the Heat. "Most of it has been silly, absolutely silly. But I understand. We live in a different world now. I can't even relate to it. I take a little bit of umbrage to some of the things that came from people in our game that all of a sudden have become the moral conscious or moral authority on the decision every team or some individual might make."

And that set the stage for some pretty direct points from Riley.

He was a bit offended by Smith, the Orlando GM, who raised questions about LeBron's competitiveness for deciding to leave a solid title contender in Cleveland to latch on with Wade and Bosh in Miami.

"When Otis Smith made a point about LeBron's competitiveness because he didn't stay in Cleveland, I thought it was an absolutely stupid remark," Riley said Friday. "He never made any kind of comment like  that when he signed (forward) Rashard Lewis, and brought him down from Seattle to a $128 million

And then there were the comments from Van Gundy, a former Heat head coach and Riley understudy before his controversial departure from Miami in 2005. It was Stan Van Gundy who was quoted in referring to Bosh as a "lapdog" to Wade in Miami.

"I don't know what happened to some of these guys along the way," Riley said.

But the best came when Riley turned his attention to Barkley, who referred to James' treatment of Cleveland and the decision to go to Miami as "punk moves." Barkley also didn't like the way the Heat celebrated the signings by putting on a fireworks show and rock concert-type performance at the arena in July.

"Charles Barkley, to me, went way over the top. Way, way, way over the top," Riley said. "For some reason (the media) and the network he works for has given this guy literary license to say whatever he  wants to say whenever he wants to say it. I think Charles is the only guy in the league who can get away 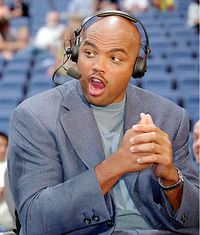 with what he gets away with ... and we all let him get away with it again. I can guarantee a couple of guys don't like that, being called that. LeBron isn't that. Dwyane is surely not that, and neither is Chris."

"There have been a number of things written all summer long about the three guys we signed," Riley said. "But in the end, they're the ones, all three of them, that showed a world-class personality. They took the hit, and now, they're ready to compete. They've been mentally tough with all these kind of things."