If you listen to the latest sales job by Heat president Pat Riley, his pitch is that Miami will be just fine this 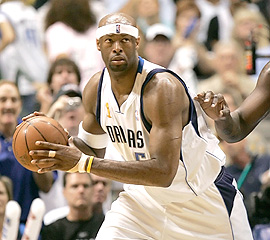 season at what arguably is the team's weakest position.

Riley sees a potential oasis where most folks see a pivotal position as stable as quicksand.

Sure, the Heat has about 28 feet of bodies committed to the center spot in the likes of 7-3 Zydrunas Ilgauskas, 6-9 Joel Anthony, 6-11 Jamaal Magloire and 6-10 Dexter Pittman. Each has either unique size or gifts. None is close to being the complete package that would make him the clear-cut anchor at the position.

And that's why Monday is the start of an intriguing period for the Heat. With training camp looming in a matter of days, there could soon be one big man on the market who has enough intangibles to garner a high level of Heat interest. Monday essentially opens the official bidding for the services of Erick Dampier.

Today marks the end of the 60-day period from which Dampier was dealt by Dallas to Charlotte, which can now trade the veteran center and his gold-mine of a $13 million, non-guaranteed contract. Dampier is highly likely to be released by any team that trades for him, meaning he'd end up a free-agent available at a drastically reduced price.

Here's where the Heat comes in, depending on how drastic a reduction Dampier is willing to accept.

Despite four bodies at center, the Heat still has questions at the position. Unfortunately, Riley only has the veteran's minimum of $1.3 million to offer - and Dampier already reportedly has turned down more than that in some preliminary discussions on a new deal with Charlotte.

But this is Miami. And there's known to be mutual interest. In fact, Dampier has already told at least one long-time associate in his Jackson, Miss. hometown that Miami would be at the top of his list if he's released. Dampier's camp also indicated that to the Bobcats, who are convinced he's likely headed for Miami if Charlotte can't find a trade partner.

But the Heat is not in position to trade for him, with only Mario Chalmers and rookies available to send.

Even at this advanced stage of his career, Dampier, 34, is still a productive rebounder and shot-blocker. And he's far from a liability on offense. That combination, alone, would - or should - put him ahead in the pecking order the Heat has right now. Otherwise, the Heat would have to explore the alternative options at center. The ones Riley laid out during his recent conference call previewing the Heat's training camp.

"I can't wait for all of this to sort of work out," Riley said, before lauding Anthony's athleticism and shot-blocking, Big Z's shooting and size and Magloire's rugged defense. "But when people look at the center position, they probably look at those three guys and say, 'It's not good enough.' "

Riley believes Chris Bosh, Juwan Howard and Udonis Haslem - all natural power forwards - have shown enough over their careers to step in and fill some voids at center. Especially from an offensive standpoint. None would - or should - be asked to man the center spot for extended stretches.

"So, I think we probably have more versatility at the center position than, I think, anybody in the league, to manage that position with versatility, with savvy, different kind of players," Riley insisted, before mentioning the Lakers, Celtics and Magic as teams that have a clear edge on Miami in the middle. "But we feel we have enough up front to match up with any of these guys."

At the time of those statements, it was difficult to tell whether Riley was working harder to convince himself or his audience of the Heat's optimism at center - as is. Dampier's arrival - via free agency by way of a trade from Charlotte and/or his subsequent release - would render Riley's reasoning a bit more of a reality.