Your Questions? Our Answers

You've got Heat questions. I've got answers. Or at least as close to them as possible. Or, maybe not. 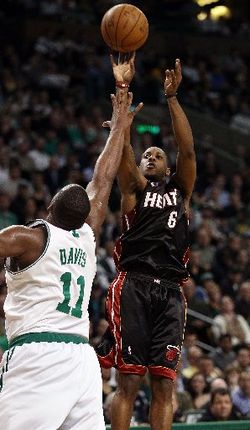 But here's a sample of the questions and answers from our weekly Heat Q&A. From Allen Iverson to Shaq. From LeBron to Pat.

Q: As a former resident of Miami for thirty years, I don't understand, if LeBron James was a free agent why did he have to sign with Cleveland and then they traded him to the Heat for two first and two second round choices?? This just does not make sense to me. Unless the Denver Post got it wrong, thats where I got the information. Thank you in advance. N. Smith

A: LeBron wanted to get a sixth season on his contract, and the Cavs wanted to get something for losing him. So that trade was the compromise.

Submitted by Keith Moon from London

Q: My friends call me Keith, you can call me John.... MW, should we be concerned about our BIGS is looks like most are 6'9", only Z is our only one over 7' and from what I hear he's not a great rebounder? Bell was a big miss, if we lose out on Barnes who else is out there for our Artest type, should this be a concern....

Submitted by rhino from wpb

Q: Wuzzzz up, Mike..... Can we all stop the, "This is Wade's team" who cares lets just kick some butt.... Why Howard over someone like Kwame, don't we already have enough 6'9" type guys?

A: It's everyone's team. But Wade has to be the ring leader. And he will probably be announced last in the starting lineup. As far as Howard over Kwame, the difference is that Juwan was fine with coming for the vets min. Kwame still believes he's worth far more.

Q: Will Tracie mcgrady and AI end up on the Heat or Stackhouse?

A: My guess is none of the above. But I could be wrong. I've been so before.

Submitted by Gabriel from Miami

Q: Is there any truth to rumor the Heat were looking to trade Rio for Rudy Fernandez and if so is that trade still a viable option?

A: The Heat had discussions with Portland on a number of levels. I think Beasley and Mario came into play. But at this point, I don't see such a trade going down unless Miami has another starting-caliber PG on the way.

Q: Hey Mike! I had to let the excitement die down before joining your forum. First I have to give good Pat his prop's for getting LBJ and Bosh. For a minute I was ready to run him out of town. But I hav a problem with bad Pat. Was bad Pat behind the decision to sign Mike Miller and sign him to a 5year deal? This sounds like the bad Pat that choose beasley over mayo. Why not resign DWright?Although i'm happy because he's playing in my area. DWright would've been the perfect compliment for the big3. I could envision a wade,bosh,wright,lbj,ilgasus or anthony lineup. That would've reminder me of the bulls lineup with jordan,pippen,harper,rodman and the other guy. In wright,wade and james they would've given you dynamic wing players that can guard multiple position and is long and athletic. With that lineup you don't need a starting point. And what's up with the suppose signing of juwan howard? The same guy who turned his back on you back in the 90's. I just hope that all this attention does'nt go to the heat especially bad pat's head. We have'nt won nothing yet. And please whatever they do. Do not bring back Shaq!!!!!!!!!!!

A: The five-year deals for Miller, Joel and Udonis are the only things you can question about Pat at this point. But I think, to some degree, you had to get the deals done against competition from other teams that had more money. So the Heat compromised by offering max years.

Q: Dear Mr. Wallace, I'm a coach on the small island of Curacao and a huge Miami Heat Fan. I see these days on the news, that everybody is talking about the Heat needing someone to start at point guard. I think the Heat can start LB(Lebron James) at point, because he can handle the ball and has the ability to pass the ball. He has also been compare to Magic Johnson in the past, as he(Magic) played that position for LA. Also the Chicago Bulls played in the 90's after they send BJ Armstrong away without a true point guard. Now that they have sign Mike Miller and luring Zydrunas Ilgauskas, they can have the following starting five in my opinion: PG Lebron James, SG Dwyane Wade, SF Mike Miller, PF Chris Bosh and C Zydrunas Ilgauskas. What do you think about that?

A: I think LeBron does have some point guard instincts. But I wouldn't put him on Magic's level in a PG sense just yet. My projected starting five is a bit different. I think Miller comes off the bench. I think Mario starts at PG and Joel starts at center.

Submitted by TEEV from opalocka

Q: CAN WE PLEASE GET THE WORD OUT TO GIVE STEVE FRANCIS A TRYOUT sorry for screaming but if Penny is an option why not franchise He has gotten paid so Im sure he would take the minimum to redeem his career and hes far younger than Penny! PLEASE

A: You just did. Still don't think anyone heard you, though.

Q: Looking at our bench we only have one player with possible firepower--Mike Miller. The rest is a mix of solid old and young guys all who aren't known for scoring. If a humbled Allen Iverson is serious about just wanting to be a bench player don't you have to look into it? He's still an expert at drawing fouls. Imagine having Wade, Lebron, and Bosh check into the game again with the other team already in the penalty!

A: A year ago, it would have made some sense. But after the way things went down in Memphis and Philly, I'm not sure if I'd take that gamble with Iverson. It's far greater risk than potential reward. And I'm an A-I guy. Always have been.