Day Six from the Las Vegas Summer League was an active one for the Heat ... way back in Miami. 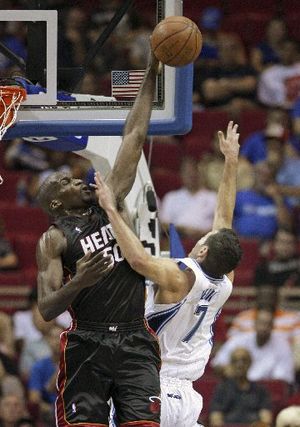 And to think that there were league executives who doubted the Heat's ability to fill out a roster around Wade, James and Bosh. If we've all learned one thing this offseason, it's don't bet against the Heat. But some of the moves are questionable. You can certainly question whether Miller or Anthony should have received five-year deals.

Miller will be 35 when his deal is up. So will Udonis Haslem. By that time, Wade, Bosh and James would probably need an infusion of youth and athleticism on the roster as they push toward the end of their contracts. And here's the ultimate irony. Anthony could be the only player among Heat veterans to have received a raise from last season. He tripled his salary in his new deal with the Heat, which gave him a about $18 million.

Yes, $18 million for Joel Anthony. More power to him. Dude made a nice come up. The Heat apparently had to outbid a few teams with cap space to re-sign Anthony. Miami made his a $1.1 million qualifying offer last month. And the offers just kept rising from there. For this price, meet the Miami Heat's starting center.

SUMMER GROOVE ROSTER: Obtained an unofficial copy of the Summer Groove roster for Sunday's game, and some of the names might intrigue you. Aaron Afflalo, Brandon Bass, Caron Butler, Daequan 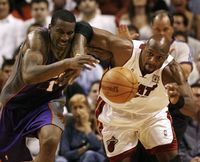 Depending on how well Timmy Hardaway makes out Sunday at AmericanAirlines Arena, he might jump into that long line of old-school vets angling for a vet's minimum contract with the Heat. I've said all along that Miami should simply round out its depth at point guard and center by adding Zo and Timmy to the roster. Heck, why not.

HEAT SMOKING IN VEGAS PLAY: The Heat improved to 3-1 Friday night in the Las Vegas Summer League with a 78-58 victory over the Milwaukee Bucks. Shavlik Randolph led Miami with 18 points, and guards Kenny Hasbrouck and Weyinmi Efejuku combined for 27 points and nine assists. Miami was without Pittman for the second straight game because of a left toe injury. But Pittman's hand was just fine - he was healthy enough to sign that three-year contract earlier in the day that pretty much guarantees his spot on the roster.

Pittman hopes to play in Saturday's summer league finale against the Cavaliers. We hear ESPN is negotiating with Pittman to do an hour-long special leading to his decision to play or not. After all, it is Heat-Cavs. And you can't have Heat-Cavs without drama.