Amid all of the hype, hysteria and genuine hoopla that surrounded Friday night's rock-concert-of-an- 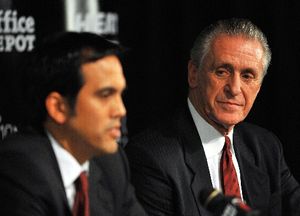 Beasley, the No. 2 pick in the 2008 NBA Draft, just wouldn't have fit in the mix, considering the Heat's star-studded overhaul. See, Beasley's $5 million salary didn't turn out to be the problem that would have prevented Miami from bringing in the Big 3.

With James, Bosh and Wade all agreeing to take about $2 million less than the first-year max salary of $16.6 million, Beasley's money was within the budget. Instead, the Heat hopes to turn that salary slot into offers for Mike Miler and Udonis Haslem. The Heat saw no reason to mix Beasley's silly antics and inconsistent production in with the new all-business approach.

Although the deal hasn't been officially finalized, the Heat has parted with Beasley. He was headed to Minnesota at last we heard for a second-round draft pick.

"Michael - it's a personal thing - he was the No. 2 pick in the draft," Riley said. "He came in very young. He came in a situation where he didn't start the first year and averaged 15 points and seven rebounds."

With Bosh clearly going to be the starter at power forward and James the starter at small forward, Riley said there was no reason to juggle Beasley's role again.

"We didn't want to do that," Riley said. "We don't want to do that. We feel like he's a young talented kid, who has a long career ahead of him. This particular move, we felt like, to bring in other complementary players, we had to go in that direction."

Riley did say he might eventually have second thoughts about dealing Beasley.

"Whatever happens, I would hate, two or three years from now - and Micky and I talked about this - I know I'm going to probably regret it when he gets 29 (points) and 19 (rebounds) on us one night. He's really a gifted kid."