Shaquille O'Neal has done it again.

No, not help his team win yet another championship. That might not happen in Cleveland after all, with the Cavaliers and LeBron James unable to get a grip on the Celtics.

And no, Shaq didn't do anything to warrant consideration for another two- or three-year contract he insists he'll seek after his current deal expires next month.

What Shaq did yet again was take another snide shot at his former team, years removed from his time with said squad. In a Sports Illustrated cover story that hits the newsstands this week, O'Neal is quoted as saying he can't figure out how his 2005-06 Heat team managed to win a championship that season.

He suggests the team might have been defined as much by Tequila as talent, Patron as production and late nights on South Beach as much as long afternoons on the practice courts at AmericanAirlines Arena.

"I still don't know how we won that championship," O'Neal tells S.I. in a story that chronicles his adjustment from superstar status to supporting cast member. "F&*%ing partied every night in Miami."

Heat president Pat Riley, who took over as coach midway through that season, declined to respond Tuesday night to Shaq's senselessness.

While the revelation probably isn't shocking, considering the distractions that come with playing in this city, it should be a bit disturbing. Shaq didn't necessarily disrespect the Heat as much as he did himself by confirming that joke of a work ethic he's had throughout his career.

If you re-examine that Heat championship team, it's mostly a collection of castaways and characters that only Al Davis and the Oakland Raiders could appreciate.

I didn't cover that Heat team in 2005-06. I came the year after. I essentially caught the hangover that followed in 2006-07. My first game on the beat was that 42-point beatdown on ring ceremony night. Considering how that title defense fizzled, it's amazing how Riley and Dwyane Wade kept that squad together the year before.

Take nothing away from that Heat team. Guys came together, put aside egos just long enough and caught fire at just the right time to deliver the first title in franchise history. But even Riley has admitted in the aftermath that he compromised a piece of his soul - as well as mortgaged part of the franchise's immediate future - for that one shining moment that produced the ultimate bling.

And he'd do it again in a heartbeat - or as quick as you can say: "Bring Back Earl Barron."

During that season - particularly that postseason run - 15 Strong could do no wrong. And for the Heat's sake, you'd have to wish that Shaq was more fond of his time here than he's shown in recent years. You'd hope that the fans would appreciate what he provided during his three-plus seasons. 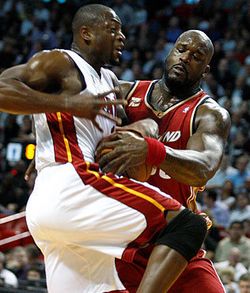 But to know Shaq is to know that he makes nostalgia impossible. Not only do bridges get burned on his way out of town, entire franchises get torched with some of his nonsense.

And I consider myself a Shaq fan. Always have been. Wade led that 2006 team to a title as MVP of the Finals against Dallas. But the Heat wouldn't have been a championship contender without Shaq. He legitimized the franchise on a national level that arguably no other player has. He energized and mobilized a Miami fan base in a way that hasn't been seen since. Be objective enough to admit that.

But his shots at Riley, the medical staff and some of his former teammates on the way out simply have been tasteless and classless. I mean, come on. What have Chris Quinn and Ron Culp ever done to hurt anybody?

Having said that, you have to wonder if that 2006 team will ever come back together for any anniversaries in the future. That season took a toll on a lot of folks.

Stan Van Gundy, who opened that season as coach before he was forced out/stepped down, has no use for the ring he was given and is still bitter about his experience that year.

Shaq and Wade both had marriages destroyed by seeds planted during that season.

Antoine Walker and Gary Payton both despised Riley on the way out.

Shandon and Derek Anderson haven't been seen since. And one didn't even bother to sign the commemorative basketball that is displayed in trophy cases in honor of each of the 15 on that team.

Wade, Udonis Haslem and Dorell Wright are the lone players who remained with the team through this season, and there's a chance next season's team might only have one or none from that 2006 squad.

When you walk through the arena hallways and look at the floor-to-ceiling championship photos that cover the walls, it seems more like 14 years have passed rather than four.

But that doesn't mean it's cool to trash and tarnish what was accomplished. Especially when, despite any faults and factions that formed that season, the ultimate goal was reached.

At 7-1, 365 pounds and in the twilight of his career, you'd think Shaq would be a bigger man than this by now. Obviously, he's still got a lot of growing to do.