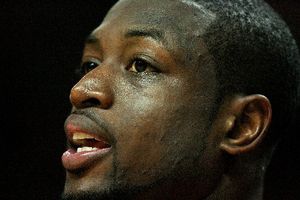 tidbits during Wednesday's workout in advance of Thursday's game against the Bulls.

-Several Heat players felt right at home during the two-hour session. And they probably should have. Miami practiced on the West Side at the spacious facility run by noted trainer Tim Grover, who has worked with Dwyane Wade, Jermaine O'Neal, Dorell Wright and Quentin Richardson among dozens of other NBA players during the NBA offseason. Just consider it the house Grover built on his hookup with Michael Jordan.

-Naturally, with Wade's high school coach (now a regional scout for the Heat) and several TV camera crews in attendance to interview Wade, the subject of potentially playing for his hometown Chicago Bulls came up. Wade, who has carefully and playfully handled questions about his pending free agency, was again prepared to offer very little. He did, however, suggest that Chicago probably shouldn't have cleared cap space especially for him. "I understand the business side of it, so I understand what they're doing," Wade said. "But it had nothing to do with me." Yeah. Right. 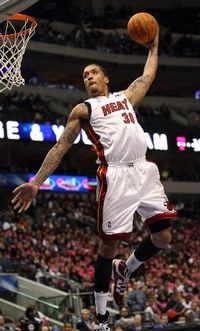 enough support to Wade's Michael Jackson, forward Michael Beasley changed his tune Wednesday. He said Barkley should feel free to call him anything he wants. He simply doesn't care. "He can call me Tito. He can call me New Edition. Spongebob. He can call me whoever he wants. I'm going to go out there and play."

Beasley said the name-calling episode with Barkley was never anything personal. "I might have said (something) the wrong way. He took it the wrong way. It escalated and snowballed. But I honestly really don't care."

-There was a first for me in four years on the Heat beat. Until Wednesday, I had never seen assistant coach and Hall of Fame player Bob McAdoo lose a shooting contest after practice to any of the players that have flowed through the franchise. If it's one thing 'Doo can still do, it's shoot the ball. He insists he could still average double figures today, at age 58, "as long as I don't have to run back the other way and play defense," he's fond of saying. But Jermaine O'Neal somehow got 'Doo to reach into his pocket to hand over a few bucks after O'Neal beat him from the college three-point line."I tried to warn him," O'Neal joked afterward. "I would have shot like 80 percent from that college three-point line had I gone to college." Responded 'Doo: "Anybody gets lucky once. He lucked up on that last shot."

-Had a chance to holler at Carlos Arroyo, who said he would not only like to resign with the Heat next

season, but that he'd also try to recruit free agent Raja Bell to play with Miami, too. Bell was released a few days ago by the Golden State Warriors. He has missed most of the season with a wrist injury. Bell played at FIU with Arroyo and still lives in Miami. "Our wives are best friends, too," Arroyo said. "I haven't talked to him since he was released, but I know he can help this team and be a good fit. Wouldn't it be something if we both were able to play here next year?"