Credit the Heat for fighting. But credit the Magic for finishing. 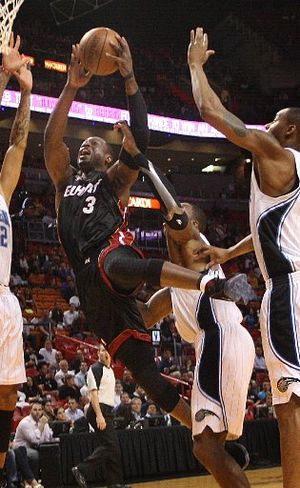 After four playoff-intense matchups between the teams this season, Miami and Orlando are even. After losing the first two meetings, the Magic rallied to take the last two games from the Heat, including Thursday's 108-102 victory at AmericanAirlines Arena.

The Heat tied the game late in the fourth after trailing by as many as 12 points midway through the period. But Orlando (49-21) made every extra shot, grabbed every loose rebound and came away with just enough blocks to reject the Heat (35-34).

After winning the first three games of the homestand, Miami is now 3-2, with the six-game stretch ending Saturday against nemesis Charlotte, which is 3-0 against the Heat this season.

Dwyane Wade, Jermaine O'Neal and Mario Chalmers did enough to put Miami in position to win down the stretch. But a couple of missed shots and late-game turnovers proved to doom the Heat's chances. These teams could very well see one another again in the postseason.

If the standings hold to form, the second-place Magic would host the seventh-place Heat in the opening round of the Eastern Conference playoffs.

D. WADE'S DOINGS: If the Heat is facing the Magic, you may as well go ahead and book Wade for at least 30 points. He always gets his numbers against former coach Stan Van Gundy and Orlando. He doesn't always get the victories, however. Wade tossed in 36 points, grabbed 10 boards and dished out seven assists on the way to filling every statistical category on the stat sheet. Wade was 12 of 26 from the field, 3 of 7 on threes and 9 of 10 from the free-throw line. He had a shot to win it in regulation, but found himself dwarfed by Matt Barnes and Dwight Howard with three seconds left before he launched a fall-away, twisting, one-handed heave. It wasn't close. The Magic loaded up on Wade in overtime, and didn't allow him the clean looks Vince Carter and Rashard Lewis got in the extra period. Still, Wade tied Alonzo Mourning with his 442 double-figure scoring game with the Heat.

TURNING POINT: Vince Carter's three-point play in the overtime period essentially put the Magic in control. He scored on a floater over Dorell Wright, was fouled and converted the free throw to put the Magic ahead 104-100 with 2:13 left in the extra period. You could tell that took the wind out of the Heat.

WINNING/LOSING EDGE: The Magic outrebounded the Heat 33-24 in the second half and overtime, and held a 20-14 edge in second-chance scoring. In a game decided by slim margins, this was the one that 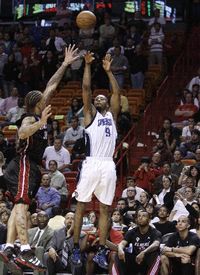 stuck out most, especially coming down the stretch.

HEAD-SCRATCHER: For all of the Heat fans who scream for Michael Beasley to finish games, there was one voice heard above all others late in Thursday's loss. A fan sitting a few rows back from press row yelled, "Take Beasley out" after the second-year forward committed a turnover late in the game. He had at least two blunders down the stretch, including a play when he mishandled a pass from Wade in transition that would have led to a layup. Beasley remains very much a polarizing figure with this team. At times, he appeared completely lost while trying to guard Rashard Lewis. At other times, Beasley's confidence soared. He made a key floater in the lane that put the Heat ahead 95-93 with 27.3 seconds left in regulation. He also made two free throws to give the Heat a 100-99 lead with 3:09 left in overtime. But his turnover with 1:19 left and the Heat trailing 105-100 was critical in that spot. These are the type of growing pains he probably should have been learning through throughout the season. For those who criticize Spoelstra's handling of Beasley, well, he went with the second-year forward for the duration of overtime while veteran Udonis Haslem sat the entire extra period. Not saying it was the wrong decision. Just saying the debate likely rages on. I've maintained all season Miami needs to find a way to make these guys co-exist. That hasn't been the case.

KEY CONTRIBUTION:Dwight Howard has struggled so much against Jermaine O'Neal and the Heat this

season that he even anticipated another tough night Thursday. O'Neal did his job again and forced Howard into foul trouble. Dwight was limited to 10 points and 11 rebounds on 3 of 9 shooting in 31 minutes. O'Neal finished with 14 points, six rebounds and five blocks, with at least four rejections coming against Howard in a straight-up situation. O'Neal didn't get much going on offense either, but over the last three games, he has frustrated Samuel Dalembert, Tim Duncan and Howard. The Heat is 1-2 to show for it. But still, O'Neal is giving the Heat what it expected when it traded for him last February. He's finding his comfort zone and legs at just the right time of the season.

NEXT UP: Charlotte Bobcats at Heat, 7:30 p.m. Saturday - AmericanAirlines Arena