This, no doubt, was necessary. This, make no mistake, was therapeutic.

This, understandably, will heal a lot of wounds. No, Tuesday's 99-66 victory over the Houston Rockets at AmericanAirlines Arena doesn't cure all. But it certainly was a step in the right direction for a Heat team that had been reeling recently.

With a quick start, a significant boost from the bench and relentless defense throughout the night, the Heat blew out the Rockets and snapped a season-long, five-game losing streak. Miami (25-27) maintained its grasp on the eighth and final playoff seed.

All of the tension, frustration and "calling out" of teammates and coaches that went on after the loss to Chicago on Saturday was channeled into one of the Heat's most resounding victories of the season.

"We just came in with an unbelievable focus," Heat forward and co-captain Udonis Haslem said. "We just came out like we were desperate, and that's what we're supposed to do."

The question is, can the Heat turn around quickly and do it again, with the Hawks up next Wednesday before the four-day All-Star break? Miami is assured of a losing record at the break, but it still has a chance to enter the break with a winning attitude.

D. WADE'S DOINGS: He didn't have to do much, for a change. Wade's supporting cast stepped up. Actually, that unit extended the lead to blowout status when Wade went to the bench in the second quarter. Wade had 17 points, seven assists and added a season-high five assists. He was 8 of 14 from the field, and even got back onto the highlight reel with a wicked dunk over Luis Scola in the second half. That should help him get over the facial he received from J.J. Hickson the other night in Cleveland. The most important stat was that Wade only played 29 minutes, which is huge considering he was able to conserve some energy for the Hawks on Wednesday. 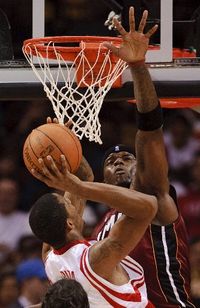 through the second quarter. The Heat's starters began to pull away at the end of the first quarter after holding the Rockets to only 16 points in the period. But it was the second unit that put it out of reach.

WINNING/LOSING EDGE: Ball movement was key. Spoelstra said he wanted the team to play at a faster pace, and that's what he got. Miami's 41 field goals came on 27 assists, with Wade, Dorell Wright and Carlos Arroyo each chipping in seven assists. The defense was just as dominant for the Heat, which held the Rockets to 30 percent shooting from the field and only 22 percent from 3-point range.

HEAD-SCRATCHER: The all-or-nothing level of production from Quentin Richardson continued Tuesday, with the Heat's starting small forward picking up two fouls in a matter of seconds early in the first quarter. It was another night of early foul trouble for forward Michael Beasley, too. The Heat's two starting forwards have been in a bit of a rut when it comes to quick whistles recently. Beasley is usually able to shoot himself out of the problem, when given the time. Richardson has not had things go his way in quite a while. While Beasley likely will - and should - remain in the starting group, it might not hurt to send Richardson to the bench for a while, especially with Dorell Wright capable of giving the Heat more energy, length and athleticism at the small forward spot right now.

KEY CONTRIBUTION: Credit the Heat's bench for stepping up after being called out by the starters and 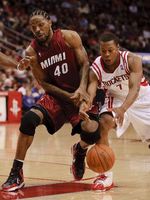 the coaching staff for inconsistent production. Sure, it was a beat up Houston team. But the Heat was in no position to take any opponent for granted. Haslem had 14 points and a season-high 14 boards. Wright flirted with a triple-double, with nine points, seven assists and six rebounds. Carlos Arroyo ran the show, starting in the decisive second quarter, with 12 points, seven assists and no turnovers. Joel Anthony swatted five shots and altered nearly a dozen more. The bench accounted for 48 of the 99 points.

NEXT UP: Heat at Atlanta Hawks, 7 p.m. Philips Arena