CHICAGO - If it was too soon to panic before Saturday night, it's officially time to do so right now. 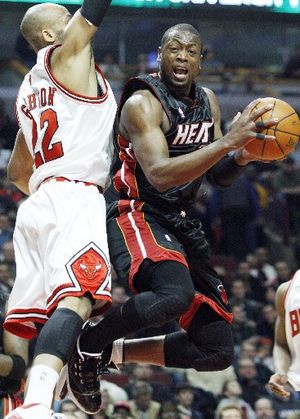 The Heat is in trouble. At the very least, Miami is at a crossroads. Players aren't sure if the system is working. Coaches can't understand why the players are so inconsistent and uncommitted from one night to the next. Dwyane Wade seemed defeated in mind, body and spirit after Saturday's 95-91 loss to the Bulls.

John Salmons nearly outscored the Heat's entire bench. Nobody in a Heat uniform could knock down a shot late in the fourth quarter. Coach Erik Spoelstra is hinting at changes again. But when pressed on what specific changes he had in mind, he retreated to the old reliable "change in mentality" response.

Everything that can go wrong has gone wrong for the Heat (24-27), which has lost five consecutive games and seven of its past eight. These are the worst times for the Heat since the end of that 2007-08 season, when Miami matched the franchise's worst finish at 15-67.

The Bulls were the team coming off a back-to-back set, while Miami was rested. Chicago was the team missing two key rotation players in Tyrus Thomas and Joakim Noah, yet the Heat was the team that had nothing left at the finish. Something's gotta give with this team. Coaches. Players. Executives. Because this season is unraveling pretty fast.

In the grand scheme of things, the Heat lost to three playoff teams on the road. But the problem comes in the fact that it couldn't protect its homecourt against the likes of Milwaukee, Charlotte and other teams that you simply have to beat at home.

D. WADE'S DOINGS: It had the makings of a productive night. Dwyane was thinking about debuting the Air Jordan 2010 signature shoes in Jordan's old stomping grounds Saturday night. He got the clearance from Nike to do so. He was also expecting to lead the Heat to a much-needed victory to end the season-long, four-game losing streak. None of the above was accomplished. Instead, Wade again sat in his locker after the game searching for answers, searching for help, searching for something to explain how things have gotten this bad for the Heat. Wade had another tough homecoming, and was 7 of 21 from the field for 20 points. He had eight assists and two steals. But he also had three turnovers, bringing his total to 23 in the past five games, and fizzled down the stretch, hitting just one shot in the fourth quarter. 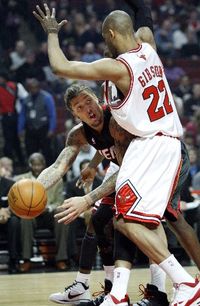 WINNING/LOSING EDGE: The free-throw disparity continues to go against the Heat. By a lot. Chicago was 28 of 35 from the line. Miami was 16 of 19. Over the last three games Miami has been outshot from the line by 17, 22 and 14 free-throw attempts. The 18 turnovers that led to 21 points by the Bulls also hurt. The Heat actually had an advantage in just about every other statistical category.

HEAD-SCRATCHER: Either it's the personnel or the program. Either the players aren't good enough, collectively, to be mediocre. Or the program from the coaching staff just isn't getting through to the guys responsible for carrying it out on the court. There is a serious disconnect with the Heat. It might be time for either a lineup shakeup or a roster shakeup. I know many of you out there are clamoring for a coaching shakeup. This is supposed to be a .500 team that believed it could build slightly off last season's 43-39 finish and first-round playoff appearance. That still might be the case. But it doesn't look that way right now. "We've lost our way," coach Erik Spoelstra said. "We will find our way again. It doesn't seem like it sometimes when you're in a streak like this."

KEY CONTRIBUTION: Jermaine O'Neal nearly had a double-double in the first half. In fact, the eight 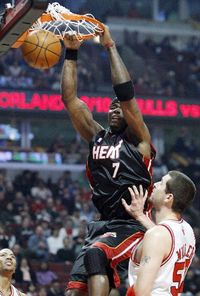 rebounds he grabbed in the first quarter were tied for the most by a Heat player in any quarter this season. O'Neal had a monster game, with 24 points, 16 rebounds and three blocks. That last time he played that well, it was in a showcase performance for the Toronto Raptors that ultimately led to the trade with Miami. Hmmm. The Heat is supposed to win when it gets those kind of numbers from Wade and O'Neal. O'Neal was 9 of 16 from the field and 6 of 7 from the line. He had six offensive rebounds. The question is now, can he do it again? And how soon?

NEXT UP: Houston Rockets at Heat, 7:30 Tuesday - AmericanAirlines Arena