It was Kumbaya Monday at the AmericanAirlines Arena practice facility. 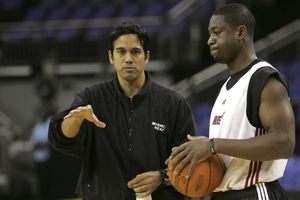 Clarifications were on tap. And didn't-really-mean-it-that-ways were a dime a dozen.

Ladies were allowed in free until the first "purity" or "resolve" was uttered from Coach Erik Spoelstra's post-practice comments. Which, of course, meant that no ladies got into Monday's session.

In case you were distracted by the Super Bowl, Monday's practice was the Heat's first team workout since Saturday's loss in Chicago. That was the night when Dwyane Wade, Jermaine O'Neal and Udonis Haslem had plenty to say after the game. Wade and O'Neal made critical comments that questioned the offense under Spoelstra and called out the second-unit for its lack of production in recent games.

All this is against the backdrop of a five-game losing streak, the Heat's longest since it lost seven in a row at the end of that miserable 2007-08 season, when it finished a franchise-worst 15-67.

If the Heat seemed like a team that was on the verge of a serious breakdown Saturday, by Monday, it was all about putting back together the emotional pieces.

The guys care. They want to win. They believe in one another, for the most part. We heard it all Monday. The one thing I'm not buying is Spoelstra's suggestion that Wade's post-game comments in Chicago were "misconstrued" to make matters seem worse than they are.

Wade then backed up his coach and suggested that his comments were filtered to come across as if his relationship with Spoelstra had soured amid the team's recent struggles. No one, at least not here, misconstrued anything. I was there. I've got the recording. And the Bulls media relations staff handed out Wade's post-game comments on the media transcript after the game.

Wade's frustration wasn't as much with Spoelstra, personally, as it was with the lack of adjustments, rotation problems and overall execution. Dude is facing traps and double teams all game and has 23 turnovers during the losing streak. He wants help. He's tired of trying to do it by himself or with inconsistent help. So I had no problem with Wade saying what he said Saturday.

But on Monday came the attempt to smooth everything over, which is understandable.

"When you go through tough stages, then you start questioning yourself, then you start questioning things," Wade said after practice. "Then it becomes (outside) chatter. It was misconstrued because I don't have a problem with Coach at all. Me and him are on one page with each other. So it was misconstrued because if I had something to say to him, I would say it to him."

But, he said it to us media types. Contrast that with what came out Wade's mouth on Saturday.

"You have to be a person willing to do it," Wade said when asked after the loss to the Bulls if it was time for a change in style and approach. "I'm not sure if Coach wants us to do that. You have to have confidence that guys are going to make that change on the go."

Wade then went on Saturday to say that "I don't know if I can agree" with Spoelstra's assessment that the team had lost its way. "I don't know what 'lost your way' says," Wade said.

Spoelstra and Wade went above the call Monday to make sure they smoothed over any rough patch that may - or may not - have existed. These two have to make it work.

Or else, this whole thing crumbles. In addition to all of those years as a video coordinator and a trusted assistant to Pat Riley, the main thing that initially sold the public on Spoelstra when he took over was that he had a solid relationship with Wade. That was his ace in the hole.

The first sign of that relationship not being one in which Wade is totally willing to vouch for suddenly places Spo in a he's-gotta-go type scenario.

So I asked Spo specifically how were things patched up after Saturday's comments.

"We talked," Spoelstra said. "But I think they were misconstrued. You can ask him about that. A lot of

that after the game was about disappointment that we haven't been able to close out games."

But what about Wade's concerns about the offense being predictable?

"We can be more efficient," Spoelstra said. "There will be tweaks. You won't see anything major. But we do need to tweak."

At the end of the day, they both want to chalk up Saturday's episode as a bit of healthy and constructive dialog during a frustrating stretch.

Wade even said Monday that he and Spoelstra shared a laugh over how some of the comments were "misconstrued" after Saturday's loss.

"Hopefully, we can pick it back up and start winning ballgames again," Wade said. "You forget all when you win. I could have said the same thing if we won five games in a row and it wouldn't have been picked up. It wouldn't have been (written) about. But when you lose and go through tough times, we go through it together. It says Heat on the front of the jerseys. No matter what, in the win column or the loss column, it doesn't say Dwyane Wade or Coach Spoelstra. It says the Miami Heat."