Despite his best recruiting efforts, Heat guard Dwyane Wade said Wednesday he wouldn't be surprised to 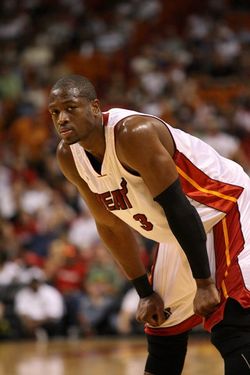 see most, if not all, of the high-profile 2010 free agents return to their respective teams next summer.

Make no mistake. Wade will continue to put the full-court press on buddies LeBron James, Chris Bosh and perhaps even Joe Johnson to leave their current teams and join him in the "paradise" that is Miami.

But loyalty - and more lucrative contracts from the home teams, barring sign-and-trade scenarios - simply might be too much from which to walk away. After all, it's loyalty that has Wade talking as a recruiter for Miami instead of a potential target of other teams sure to come his way this summer.

So even with Wade, Bosh and Bron all secretly fantasizing about what it would be like to spend a season or three on an NBA championship jewelry heist, even Wade realizes that all the 2010 hype could eventually turn into superstars staying home when the signing period opens in July.

"I wouldn't be surprised at all. Not at all," Wade said after Wednesday's practice at AmericanAirlines arena as the Heat prepares to welcome Dallas and fellow 2010 free agent Dirk Nowitzki to Miami on Friday. "I know everyone has something special in their hearts for their organizations. You've been here for seven years. You can't have nothing but love for the city that you're in, nothing but love for the organizations."

Wade, who is particularly close with Bosh and James, said that although all three have gone through NBA coaching changes and a disappointing season or two (Wade is the only one from the high end of the 2003 draft class to win a title), none has particularly been at odds with their respective teams. "None of those guys have been in trouble with their organizations or back and forth," Wade said. "So at the end of the day, it's just about guys deciding what they want to do with the future of their careers."

With the Heat in better position than any team in the league to re-sign its own star and add as many as two others from the 2010 class, Wade said it's practically his obligation to frequently remind a few of his buddies of the perks that would come with suiting up in Miami.

But Wade's free-speech approach to recruiting (which could border on NBA tampering rules to some degree), has put a bit of heat on his buddies. The more Wade talks, the less LeBron and Bosh have to say about their futures of potential freedom.

So is Wade getting his pals in trouble with their respective hometown media, fans and front-offices?

"Am I getting them in trouble? Nah. I'm not," Wade said with a sly smile. "Them guys like Chris and LeBron, who decided not to talk about it, it's no secret they have to sit down and think. If they didn't have to think about their futures, they would already have committed back (to their teams). I'm not going to say anything about those guys not being happy with their organizations, because they might be."

Still, Wade is playing with house money at this point, considering Miami's position. And he remains committed to doing his part to break up a couple of other happy NBA homes by getting a couple of friends to leave their mansions to help build a Dade County empire.

"We're all boys," Wade said. "It's no secret that we're all going to sit down again and talk about it."

Bosh and Bron might be silent for now. But when - or if - the time comes again to open up with Wade, that'll be one case when talk certainly won't be cheap.

Blog Note: Please accept our apologies for the technical problems that prevented us from posting the Heat blog the past few days. We've definitely heard your comments, concerns and complaints. Things should be back to normal by Friday's game against the Mavericks. As a new feature, Michael Wallace will log back onto the blog periodically after each day's post to respond to your comments. So keep them coming. And keep them clean. Or at least really, really try to.