Dwyane Wade must be a Coke guy. 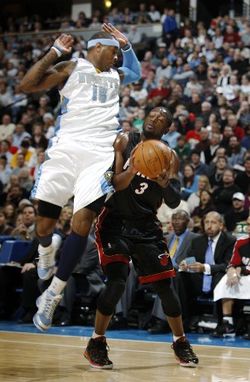 Because his teams just can't seem to get anything accomplished at the Pepsi Center.

Denver remains the only spot in the league where Wade has yet to experience a victory in his seven NBA seasons. The drought continued Thursday, when the Nuggets simply pummeled the Heat 114-96. The up-and-down play continued for Miami (10-8), which followed its most complete victory of the season Tuesday in Portland with perhaps its most uninspired game of the year against the Nuggets.

This was the equivalent of a varsity team schooling the JV. Chauncey Billups' experience, swagger and veteran play simply made Mario Chalmers vanish. Billups forced Chalmers into early foul trouble and did whatever he wanted in the matchup. It was almost sad how bad of a mismatch it was.

Michael Beasley was able to keep up his recent scoring edge. But he offered very little on the defensive end as veteran Kenyon Martin bullied him down low for buckets and rebounds. Nene's strength and explosive play made it seem at times like Jermaine O'Neal wasn't even on the court.

The game was billed as a showdown between Wade and Carmelo Anthony, the league's scoring champ last season versus the NBA's current leading scorer. Neither had a particularly good night. But the Nuggets secured the series split after they were blown out in Miami three weeks ago.

As bad as things were Thursday, it could get even uglier for the Heat on Friday against the Lakers in the second game of a back-to-back set. Or, if the current pattern holds, don't be shocked if Miami has its best game of the season. Go figure.

D. WADE'S DOINGS: Anger, a retooled body and a determination to prove any doubters wrong inspired Wade through an MVP-worthy season a year ago. He's yet to find that proverbial chip on his shoulder this season. Something's missing from his approach. Yes, the defenses are focusing on Wade and forcing him into tough spots. But that's been the case for years now. And you can't blame it totally on his teammates not consistently helping him out, because these were the same teammates he had last season when he was torching the league. He's never had such a sustained stretch of offensive sluggishness. Wade missed 7 of his first 8 shots Thursday and finished 8 of 20 from the field for 25 points with a season-high 10 boards. He also had 4 turnovers and had his shot blocked three times. He didn't seem to get fired up until the third quarter, when he directed that anger toward officials instead of Denver's defense. 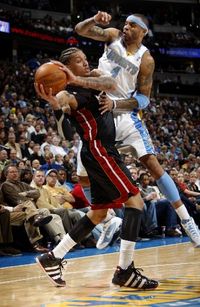 TURNING POINT: The Nuggets used a 13-0 run in the second quarter to open up a sizable cushion and establish their dominance in the paint. Majority of that run came with the second units of both teams on the court. Chris Anderson blocked shots, J.R. Smith made plenty of them and Denver's energy and aggressive play set the tone for what essentially was the early knockout blow. The lead stretched to 23 by the midway point of the third quarter. The Heat got very little from its bench in response. Udonis Haslem, Carlos Arroyo, James Jones and Dorell Wright only added to the problems during that decisive stretch.

LOSING EDGE: The Heat was outscored 33-20 from the free-throw line. The Nuggets also shot 52.9 percent from 3-point range.

HEAD SCRATCHERS: If you watched the game in high definition, perhaps you can answer this one. Who wins the tattoo matchup between Miami's Michael Beasley and Denver's Chris Anderson? Throw in Quentin Richardson, Dorell Wright, Jermain O'Neal, Kenyon Martin, J.R. Smith and Carmelo Anthony, and you might have the two most tatted teams in the league ... Also, Richardson attempted his first free throw of the season Thursday. It only took 18 games for the Heat's starting small forward to find his way to the line. But he missed the first quarter technical free throw ... How does the point guard not know the shot-clock situation. Carlos Arroyo committed that cardinal sin in the second quarter, when he inadvertently dribbled out the final seconds of a shot-clock violation for a turnover during the 13-0 Denver run.

KEY CONTRIBUTION: Beasley got his numbers again, continuing a stretch in which he came in averaging 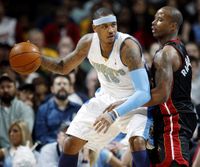 19 points and eight rebounds the past two weeks. He had a solid start and scored eight consecutive Heat points in the first half. But he sort of lost his way once the Nuggets began to attack him on defense. Beasley finished with 17 points and seven rebounds in 35 minutes. The Heat's other three starters - Richardson, O'Neal and Chalmers - combined for only 19 points. Credit Richardson for making Anthony work hard on a night when he was held 8 points below his league leading 30-point average and was 6 of 17 from the field. Miami is now 1-1 on the four-game trip that ends Sunday at Sacramento.