This was the Heat's supporting cast at its best. No doubt about it. 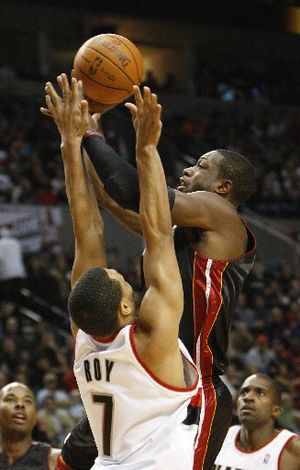 This is how you want to open a four-game Western conference swing and put behind consecutive home losses to Boston and Washington. Adversity? What adversity?

In perhaps its most impressive performance of the season, the Heat cruised to a 107-100 victory against the Portland Trail Blazers at the Rose Garden on Tuesday. Dwyane Wade notched his first double-double of the season, while Michael Beasley and Quentin Richardson both turned in season-high scoring efforts to snap a four-game losing streak against the Blazers.

With the win, the Heat (10-7) avenged its worst loss of the season last year in a 106-68 loss at Portland. The victory also assured that Miami will return home from the four-game trip with at least a .500 record.

The Heat needed this one. Badly. Now, a 2-2 finish on the trip isn't so far fetched. All it has to do is figure out a way to steal another one from either Denver, the Lakers or Sacramento. The Heat is now 4-2 on the road, which is better than its 6-5 mark at home this season.

D. WADE'S DOINGS: Wade did a masterful job of managing the game while facing a Portland defense that was intent on taking away his lanes to the basket. Instead, Wade shifted to point guard in the third quarter and picked apart the Blazers while finding teammates. Along the way, he accumulated his first double-double of the season with 22 points and a season-high 12 assists. Michael Beasley and Quentin Richardson, who finished with 20 points in his return to the starting lineup from a back injury, were the main recipients of Wade's playmaking skills. It goes without saying that the Heat's starting shooting guard is the best point guard on the team. Imagine the possibilities if Wade truly embraced the role.

TURNING POINT: That came the moment Heat coach Erik Spoelstra learned the Blazers would be without

both LaMarcus Aldridge and Travis Outlaw because of injuries. Aldridge and Outlaw, a pair of long, athletic, attacking and aggressive forwards, are the type of players who give the Heat fits on both ends of the court. Beasley didn't have to defend or shoot over the 6-11 Aldridge. Wade and Richardson didn't have to deal with the long-armed Outlaw. Portland still dominated the offensive glass, but didn't have two of its better finishers in the lane. Coach Nate McMillan was playing with a short deck a few other options.

WINNING EDGE: Balance. Neither of Miami's first two scorers to reach 20 points were named Dwyane Wade. Beasley got there early in the third quarter and Richardson, who had 20 points and nine rebounds, followed midway through the fourth. This clearly was the Heat's most complete and promising game of the season. The roster lived up to its fullest potential, considering the circumstances and rotation limitations. There was movement in the offensive sets. Wade got off the ball, swinging it frequently to the weak side, where shooters made shots in key moments. Beasley was a beast in the lane again and didn't settle for jumpers. Every bit of Tuesday's offense will be needed Thursday in Denver, which scored 135 points in a win Tuesday.

HEAD SCRATCHER: If there was one curious aspect from Tuesday's game, it was the frequent shots of Daequan Cook sitting on the floor in front of the bench. If Cook, who remains mired in an awful shooting slump, isn't careful, he might be watching yet another opportunity slip away. The Heat used 10 players against the Blazers. The two who dressed but didn't play were Cook and center Jamaal Magloire. In just a short span, Cook has gone from being on his way to securing the sixth-man role (or first guard off the bench) to being the Heat's 11th man on the active roster. A shoulder injury has stunted his development this season, but 29-percent shooting from the field also has been a factor.

KEY CONTRIBUTION: Michael Beasley has established himself as a force in the offense, without having 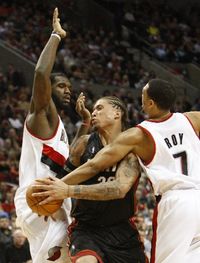 to force shots at the expense of team chemistry. Beasley had 18 points in the first half. He closed with 27 points and eight rebounds. But the most encouraging aspect of his performance were his trips to the free-throw line as a result of aggressive drives to the basket. When Beas is going strong, he can't possibly go wrong. Beasley attempted his 10th free throw just two minutes into the second half, which matched his career high, and then set it with 12 attempts for the game.  He came in averaging 17 points and nine rebounds over his previous six games. If he can keep this up, Wade's three-year search for a consistent sidekick might soon come to a productive and promising end. Beasley continues to find his way on the other end of the court, but it's clearly apparent that his offensive firepower is starting to far overshadow any defensive deficiencies.