In Thursday's loss to Cleveland, Dwyane Wade topped the highlights with a thunderous flush over 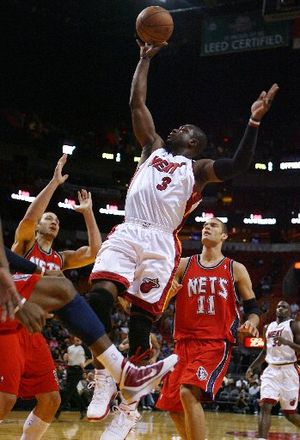 Anderson Varejao. On Saturday, the signature moment came with a finishing swish.

Wade's three-pointer with one-tenth of a second left over Trenton Hassell allowed the Heat to avert disaster and escape with a 81-80 victory over the winless New Jersey Nets.

One flick of the wrist was the difference between the Heat becoming the first team to fall to Nets (0-10) and Erik Spoelstra becoming the fastest coach in franchise history to win his 50th game. Spoelstra, nine games into his second season, got to the mark two games faster than Stan Van Gundy.

Both had Wade to thank for the victories. Especially on Saturday night.

"Well thank you, Wade, for burying that three," Spoelstra said afterward. "I didn't really help us out. At times, that's what the great ones do. They bail you out of a competitive but frustrating game."

But it wasn't just Wade. Quentin Richardson's three with 25 seconds left set up the final dagger. And Udonis Haslem's career-high tying 28 points and 12 rebounds kept the Heat close enough to close it out.

D. WADE'S DOINGS: Wade was 0 of 4 from three-point range before he stepped back and raised up for the game-winner. Didn't matter. "I don't really worry about that," Wade said. "My focus ain't on nothing I did earlier. It's just about that moment." And Wade delivered. His shot capped perhaps his most complete performance of the season. A first-quarter injury to Mario Chalmers forced Wade into more of a playmaking role. He came through with 22 points (setting a franchise record with his 22nd straight game of 20-plus points). Wade also added 8 rebounds, 6 assists, 6 steals and 2 blocks in 42 minutes.

TURNING POINT: Wade's shot won it with essentially no time left. But the turning point came when Sean Williams, who has had his way with Michael Beasley since the Orlando summer league last year, blocked Beasley's shot with 33 seconds left and the Heat trailing 78-75. Williams appeared to grab the ball, and then he lost it out of bounds. That's when it seemed divine intervention may have been on Miami's side. Eight seconds later, Quentin Richardson nailed his banked-in 3-pointer to tie it. That was prayer No. 1 answered. Then came prayer No. 2: Wade's final dagger. 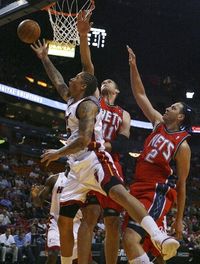 WINNING EDGE: On a big-time fight night, the Heat did some damage with body work. That would be its edge rebounding on the offensive glass. The Heat turned 15 offensive boards into an 18-10 advantage in second-chance points. Beasley had five offensive boards, Haslem had four and Joel Anthony had three.

HEAD-SCRATCHER: Mario Chalmers left the game in the first quarter with a freak injury. The team called it a strained right shoulder. Spoelstra called it a slightly pinched nerve or a stinger. Chalmers wasn't quite sure what happened. All he know is that when he tossed a halfcourt lob to Wade on an alley-oop, there was a sharp pain that shot through his right arm. Chalmers didn't return and is considered day to day. The Heat was already without center Jermaine O'Neal, who sat with a bruised hip sustained in Thursday's loss to the Cavaliers.

KEY CONTRIBUTION: Haslem had perhaps his best game as a Heat player. Sure, it came against a winless Nets team. But if it weren't for UD's career-high 28 points and 12 rebounds, the Heat wouldn't have been able to keep up with the Nets. Miami simply had no answer in the second half for Brook Lopez and Sean Williams. The Heat needed every point Haslem could provide. Halsem and Beasley had problems matching the athleticism of the Nets frontline players.

NEXT UP: Oklahoma City Thunder at Heat, Tuesday 7:30 AmericanAirlines Arena