« Evaluating the Heat's offseason | Main | Dwyane Wade's future: Is it in Miami? » 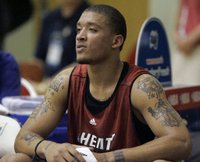 Heat rookie forward Michael Beasley was fined $50,000 by the NBA Thursday, after admitting he was involved in an incident at the Rookie Transition Program. He will not have to repeat the league's rookie symposium, faces no suspension or further punishment from the Heat.

Beasley did not cooperate with the league's investigation into the incident, which also involved Heat point guard Mario Chalmers and Memphis forward Darrell Arthur. Chalmers and Arthur were expelled from the rookie symposium and each fined $20,000.

As you may recall, two women were found in Arthur and Chalmers' hotel room, a violation of league policy, and security detected the smell of marijuana but did not find drugs or drug paraphernalia. Now it comes to light that Beasley was in the room--for at least part of the time--and that he came forward this week about involvement.

What's your reaction to Beasley's involvement and punishment?  Are you pleased that he decided to come forward after not cooperating with the investigation? Unhappy that it unfolded this way?