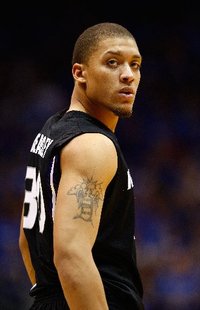 And that just might be the most difficult task Heat president Pat Riley faces if things go according to most expectations, with Rose appearing more and more likely a lock to go the Chicago Bulls as the No. 1 pick. Which, of course, would leave Beasley in Riley's lap at No. 2.

There's plenty to like about Beasley, whose 26.2 points per game ranked third in the country last season while his 12.4 rebounds a game led the nation. There are just as many things about Beasley that will leave you scratching your head, wondering, "Did he just really say - or do - that?" The late author Claude Brown didn't exactly have Beasley in mind when he wrote his most famous book, but the former Kansas State power forward is clearly a Manchild entering the Promised Land.

He's clearly mannish in some ways, childish in others. And he embraces both parts of his persona. The best and worst of Beasley's personality was on display during Thursday's Pre-Draft Camp media session.

The same player who considers himself 30 years old in basketball maturity admits he's every bit as immature a 19-year-old as they come. You have to wonder if the same player who has the potential to become the next Charles Barkley has truly learned from his Dennis The Menace past. The same Beasley who scores and rebounds as easily as most folks walk and talk is the same Beasley who is only a year removed from many of the silly antics that got him kicked out of several high schools.

Beasley is many things. An enigma mostly. But consider this: He is just what the NBA has created in its obsession with placing more value on a kid's basketball potential than his quality person potential. The same media circus that covers his quest to become the No. 1 pick also questions why he can be so young and stupid sometimes with his antics.

Beasley was brutally honest and candid when he answered on Thursday. That set him apart from the others he shared the room with. But he didn't necessarily erase any concerns Pat Riley or John Paxson might have about turning their respective franchises over to him from a maturity standpoint.

When a Chicago reporter asked what influence his mother has had on him, what advice she's given him about maturity and growing up, Beasley quickly turned the question around and tossed it back.

"Life lessons," he shot back, defensively. "The same kind of lessons your mother taught you. I got into trouble. But I don't do those things anymore. You learn a lot as you grow."

You can't blame Beasley for being a kid, playing a kid's game and wanting to have fun at this point in his life. He's a college freshman. But you also can't blame Riley if he's seriously considering parting with this pick for veteran help and another pick later in the draft. The Heat is already battling maturity issues with Dorell Wright and Daequan Cook. Winning games is hard enough when it doesn't come with the added responsibility of grooming character along the way. But that's the NBA today.

Beasley was asked what he would tell Riley during his Miami visit once the subject turned to maturity and some of his immature antics of the past. He said he'd talk about the present and future.

Beasley is many things. His own man - or manchild - among them.